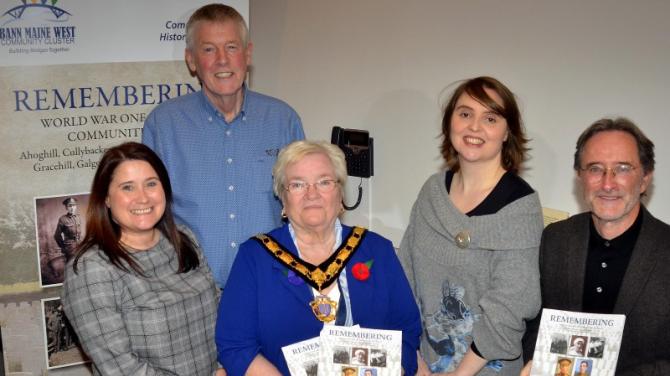 The new World War One local history publication 'Remembering' is truly a credit to all involved in the project.

'Remembering' was launched before an appreciative audience - most of whom had played some part in the book's compilationÂ - in the Studio Theatre at Ballymena's Braid Arts Centre last Wednesday evening.

The book's full title is 'World War One and the communities of Ahoghill, Cullybackey, Grange, Hillstown, Cloney, Gracehill, Galgorm, Tullygarley and Portglenone'.

The writing and research was entirely the work of volunteers from the Bann Maine West Community (BMW) Cluster which serves the villages, townlands and rural areas to the west of Ballymena.

And their hard work has paid a handsome dividend with a high quality, full colour volume they can be justifiably proud of.

Running to 128 pages, 'Remembering' not only tells the story of the men (and women) from the BMW areas of interest but combines their personal tales and pictures with a concise timeline of the war itself.

The experiences covered by the book range from the very earliest days of the conflict when the cloth capped 'old sweats' of the regular army clashed at places like Mons and Le Cateau right through the industrial scale horror of the Somme, Ypres and the last 100 days of almost incessant battle in 1918.

The war at sea is also covered as are the campaigns at Gallipoli and the Middle East. As the book records, the vast majority of local men fought in local regiments like the Royal Irish Rifles or Inniskilling Fusiliers but a sizeable number of men who had emigrated from this small corner of Co. Antrim joined up with 'Imperial Forces' in Canada, New Zealand and Australia.

And there is also a significant story told of the many locals who were working in Scotland and decided to join up with the famous regiments in that country.

For some the swagger of the kilt may have influenced their judgment - whether they thought that was a wise decision on cold winter day in the trenches remains to be seen.

Ballymena Guardian editor, Des Blackadder, who attended the launch said the book was a fine example of how the history of the conflict could be made relevant in today's society. "Not only is the book a fine tribute to those men and women but it sets their world and war experiences in context for today's generation. I heartily recommend this book to anyone with an interest in local history."

Deputy Mayor, Beth Adger, who spoke at the launch, said that Mid and East Antrim Council were proud to be associated with the project and complimented the BMW group on the outcome of their hard work.

Damien Clarke, the principal writer and named author of the book explained the ethos which had been established by the Bann Maine West History Project Committee.

"Rather than compile a list of those who served , or died, in the war, something which is well undertaken elsewhere, it was decided to concentrate on connecting some of the local participants in the conflict with the major events that tok place during the fighting.

"The desire was to reflect something of the background, and lives lived, by the soldiers involved and contrast this with the horrors they encountered on the battlefield."

A special ackowledgement was made on the night of the research debt owed to John Hoy and Des Blackadder who created the immense 'Ballymena 1914-1918 website' which covers the entire Borough experience in the conflict.

"It must be said that its completion would nopt have been possible without reference to that website and its two main components 'Weekly War' and 'Virtual Memorial', " said Bann Maine West's Joanne Brown- Kerr.

Bann Maine West would like to acknowledge and thank their main funder, the National Lottery Heritage Fund and also extend thanks to Mid & East Antrim Borough Council Good Relations Fund.