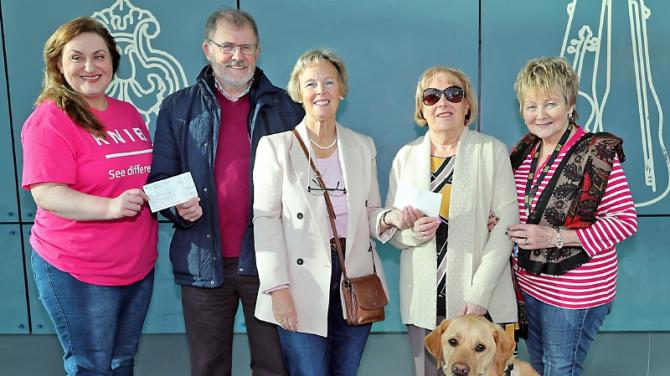 BALLYMENA theatre group The Castle Players have been entertaining audiences for six years with their popular renditions of the hilarious Sam Cree plays.

And in that time the group have also raised over £4,000 for charity as the result of proceeds from their productions.

This year The Castle Players have donated money to four charities – Guide Dogs for the Blind Association, Air Ambulance, Leukemia and Lymphoma Care and the RNIB.

The Castle Players consists of people of all ages who have a keen interest in amateur dramatics.

During September they took to the stage in the Sam Cree play “Stop It Nurse” for two nights at The Braid in Ballymena and two nights at St Olcan’s Parish Centre in Rasharkin.

The play proved a hit with audiences with over 200 people attending the first night at the Braid followed by 160 on the second night.

Similarly over 100 people turned up on the first night in Rasharkin with 80 attending on the following night.

Chairperson Lorraine Clarke said: “We have a great cast and we tend to have more members as the each year passes.

“We always put on the Sam Cree plays because they are comedies which always prove popular with audiences.”

The Castle Players are a cross-community amateur Drama Group based in Ballymena.

The group was established in 2013 and membership has continued to grow.

The group are working on their next performance and anyone who is interested in joining can contact the Braid Arts Centre in Ballymena.