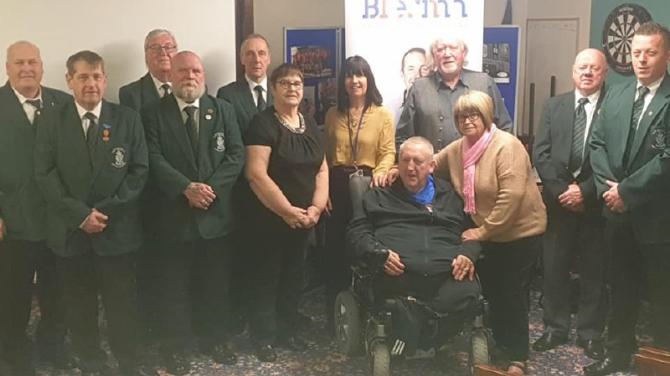 MUCH has been written about the horrors of the First World War which raged between 1914 and 1918.

Much less has been written about the years after the conflict and how the wounds - mental and physical - continued to effect soldiers for a very long time.

Legacies of the Great War - a ‘double diary event’ held over the weekend at Ballymena Services Club, examined this aspect of the post war period.

On Friday, (October 25) there Fiona Morrison explained the origins and current work of Blesma (British Limbless Ex-Servicemens Association) and Martin Snoddon explored death, disability and disfigurement during the Great War.

During the event members of the Braidwater Seniors donated a number of knitted items to Fiona which will be used as counselling aids.

Fiona explained: “Blesma is an Armed Forces national charity founded in the aftermath of the First World War. Blesma supports serving and ex-serving men and women who have suffered life changing injuries whether this is during or after military service.

“Blesma is a membership charity and provides lifelong support to its members and following the death of a member, the widow/widower have membership in their own right and are provided with the same lifelong support, in essence caring for the carer.

“My primary role as the Blesma Outreach Officer is to reach out to Blesma members in Northern Ireland and provide practical and demonstrative support. I do this through home visits and regular contact by phone.

“By listening to our members this supports and enables me to organise activities and events, whether this is member only or incorporates the family unit. Any event or activity is seen as a positive step to bring our members and families together.

“ Most importantly if there is a need to reduce social isolation and loneliness and ensure our members are not failed, forgotten or left behind. We work alongside our members to support and enable them to lead independent and fulfilling lives.”

On Saturday (October 26) there was an exhibition of militaria by two collectors - Ashley Forbes and Allistair Kitson.

The Legacies of the Great War project was organised by the 12th Battalion Royal Irish Rifles Memorial Association and supported by the Carson Project. Both groups would like to thank everybody who attended the events.