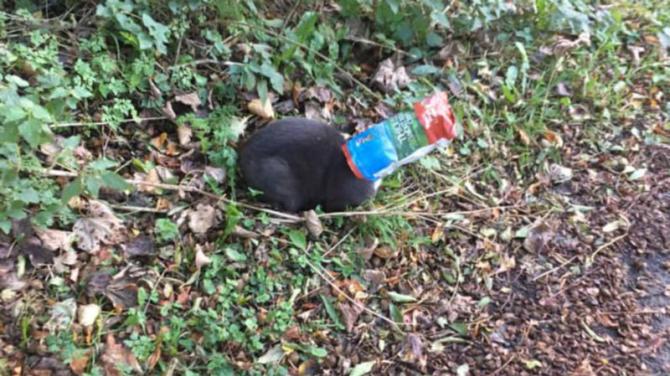 A Ballymena woman has urged people to stop littering after she rescued a cat which had it’s head stuck in a crisp packet.

Katie Burnside found the distressed cat when she was out with her daughter Eila, aged two, litter picking along the Kennelbridge Road. Katie is often helped on her litter picks by Eila and her four year old son Reuben

She said: “If my little girlis capable of walking down our road gathering up people’s rubbish which they have selfishly cast from their cars, surely those adults driving the cars can be capable of holding on to their rubbish until they get to a bin. The rural roads around Ballymena are a disgrace.”

Katie came across the cat recently during the school run.

She said: “Less than 24 hours after we did the clean-up of our road we came across this poor wee cat caught in a crisp packet just around the corner from us, as we did the school run. This wee creature had totally given up and was just crouched at the roadside, waiting for death.

“I pulled the bag off, and it sat stunned for a moment, gasping for breath, before it ran off, terrified. I am just so glad we found it in time.”

Katie said that because of someone's littering “this wee soul nearly died, and a family nearly lost their pet”.