Rare Nighthawk proves to be the Maine attraction! 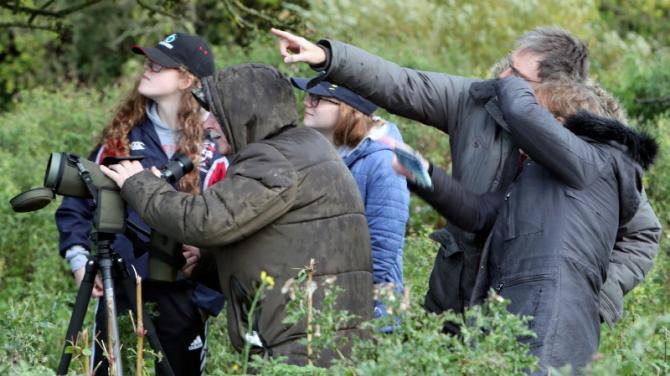 BIRDWATCHERS have travelled from all over Ireland and further afield to see a very rare feathered visitor to our shores as it graces the banks of the River Maine outside Ballymena.

The Common Nighthawk was enjoying celebrity status amongst 'twitchers' as it swooped gracefully along the river last week.

Scores of visitors, many equipped with the finest photographic equipment, turned up in the hope of sighting the special attraction last week.

The common nighthawk (Chordeiles minor) is a medium-sized nocturnal bird of the Americas within the nightjar family.

Typically dark (grey, black and brown), with intricate patterns, thebird is difficult to spot with the naked eye during the day. However, once aerial, with its buoyant but erratic flight, this bird is most conspicuous.

One of those who had the opportunity to view the bird last week was RSPB site manager, Brad Robson.

He said: “It really is a fantastic bird. It sits on branches during the day and then at night it flies about hunting insects.

“To see a Common Nighthawk is very rare indeed in fact it is the first one recorded in Northern Ireland. There have been sightings in Ireland on just a couple of occasions.”

Its appearance in Ballymena has generated huge interest with bird watchers coming over from the UK to see it.

Brad went on to explain that the bird is likely to have ended up in Ballymena due to the recent Storm Lorenzo.

He said: “The Common Nighthawk breeds across North America and then they migrate to warmer parts of South America.

“During that migration some will fly out over the coast. However, when you get these big powerful weather systems which you see across the Atlantic at this time of year some of those birds can get caught up in the storms. They are then whisked off across the Atlantic and one of their first landing stops can be Ireland.

“When a bird is travelling in a weather system it cannot feed so the faster the weather system is across the Atlantic the more chance of it surviving the journey. Some birds will often rest on ships, however, that is unlikely to be the case with this bird.”

Brad said that whilst the sighting in Ballymena is “very rare” the storm did bring a some American birds to Europe, causing a lot of excitement among bird watchers.

He added: “It was great to see the Common Nighthawk flying about hoovering up the insects and I think everyone there was pleased to be able to see it so easily.”

According to nibirds it is now believed that the Common Nighthawk is an adult male due to the bright white throat, the thick white bars near the base of the primaries and the blackish primaries and has been present in the area since September 13.

According to nibirds it is now believed that the Common Nighthawk is an adult male due to the bright white throat, the thick white bars near the base of the primaries and the blackish primaries and has been present in the area since September 13.

The enormous distance travelled between breeding grounds and wintering range is one of the North America's longer migrations.

The northbound journey commences at the end of February and the birds reach destinations as late as mid-June. The southbound migration commences mid-July and reaches a close in early October.

While migrating, these birds have been reported travelling through middle America, Florida, the West Indies, Cuba, the Caribbean and Bermuda, finally completing their journey in the wintering grounds of South America, primarily Argentina.