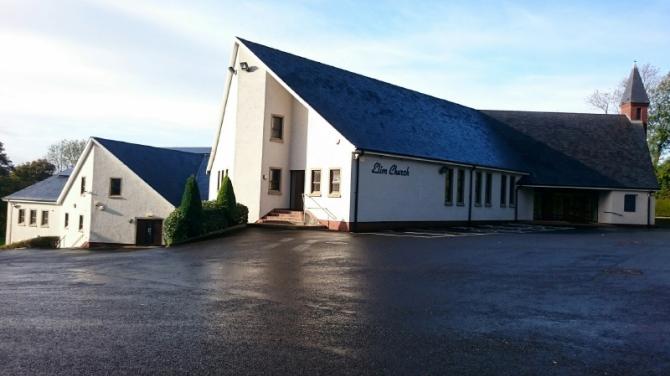 In the year 1915, the young Welsh Pentecostal preacher George Jeffreys was invited to Ireland to conduct Evangelistic meetings in Monaghan.

As a result, a church was established which continues in Monaghan town to this day.

After further crusades and meetings, churches were also established in Belfast and other towns including Ballymena.

These churches formed the beginnings of what is now known as the Elim Pentecostal Movement.

Outreach meetings continued, and a tent crusade was held in Cullybackey in 1919 following which an Elim church was established by a handful of local people who had embraced the Pentecostal doctrine.

These believers used an old portable wooden shed in Pottinger street as their meeting place.

The Pentecostal message was revolutionary at that time. Salvation was to be found by faith alone in the Lord Jesus Christ. Baptism in water was by total immersion and for believers only.

There was also a further spiritual experience for believers, namely the Baptism in the Holy Spirit as recorded in Acts ch 2 of the Bible and the restoration of the nine gifts of the Spirit as mentioned in 1 Corinthians chapter 12.

The ordinance of communion in memory of the Lord’s death as recorded in 1 Corinthians ch 11 was observed on a weekly basis and was only for those who were “born again” as mentioned in St. John ch 3.

The Pentecostal message also proclaimed the promise of the second coming of the Lord Jesus Christ as found in Act ch 1 and numerous other places in the Bible.

Today, Cullybackey Elim still holds fast to and practices all aspects of that same Pentecostal message.

This past 100 years however have seen many changes. Blessed by the Lord, Cullybackey Elim church continued to grow and in the nineteen fifties the initial wooden meeting place was replaced by a permanent building in Pottinger Street.

Then in the nineteen eighties, a new site was purchased on the edge of the village on Shellinghill Road where the present Church building stands.

Since the construction of the current building a further extension has seen the addition of a sports hall, youth centre, additional rooms and another kitchen.

Over the years the activities of the church have touched every age group of the community from Sunshine Corner for primary school children, through youth, ladies, and men’s fellowship, to senior citizens.

There is outreach to single parents, practical help and support to those in need and a drop in/welcome centre “The Mustardseed 100” situated on Main Street Culybackey which is used by all ages.

The church has an active missions department, it has supported and sent missionaries to many parts of the world.

Through its varied ministry, Cullybackey Elim has been used of the Lord to bring many people to salvation, some of whom have been called to the ministry, not just in the Elim movement but in other Christian denominations and organisations as well.

To-day the ministry of the church also uses social media and the internet to herald the full gospel message to many countries around the globe, through its website, Youtube, periscope, twitter, soundcloud and Facebook. People in nations all over the world watch and listen on a regular basis.

To celebrate this centenary year, Cullybackey Elim has planned a week-end of special meetings to give thanks to the Lord for His enabling and faithfulness down through the years.

A book entitled “Labouring with the Lord” which is an overview of the witness of Cullybackey Elim, has been written by one of the church elders, Mr. Walter Spence. (Many will know Walter from the family business, Spence’s Menswear in Castle Street, Ballymena.)

He and his wife Beth have overseen this project and the book which has been published by JC Print will have its launch and will be available.

The week-end runs from Friday 17 October – Sunday evening the 20 October.

A warm invitation is extended by the church to all in the community at large to join with them to commemorate this milestone and look to the Lord for the future in His will.