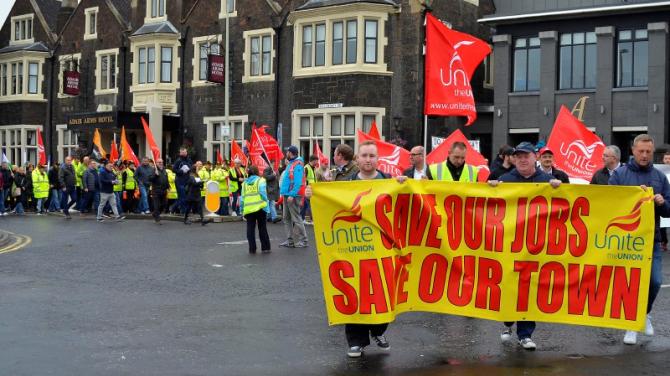 UNION officials have called on landowner Jeff Wright to safeguard his family’s legacy.

In a hard hitting statement they say the Wright name could become ‘synonymous with the collapse of manufacturing in Ballymena’.

And they have called on incoming Chief Executive of Invest NI Kevin Holland to intervene and provide full start-up supports to Wrightbus.

“It is our understanding that the offer put forward by Ryse (Bamford) remains open and on the table if the current landowner is willing to do a deal.

"The big question now is whether Jeff Wright is prepared to put his father’s legacy and reputation amongst the people of Ballymena at risk.

“Dr William Wright is quite rightly regarded as one of Northern Ireland's leading visionaries; a man who embraced progressive developments over many decades to ensure environmental concerns were at the forefront of technological advancements.

"Unfortunately the unrealistic demands by his son with regard to the sale of the Ballymena manufacturing site, pivotal to the safeguarding of many hundreds of jobs, will leave a bitter taste to the local community which has shown immense loyalty to the Wright family since the 1940s.

"If there is no compromise from Jeff Wright, the family name will be remembered by the local community in the same vein as JTI and Michelin the other blue chip companies that recently deserted the very people that made their brands global industry icons.

"There is a need for action from government as well. In the absence of Stormont the Permanent Secretary Noel Lavery needs to step up to the plate and ensure that both outgoing Invest NI CEO Alistair Hamilton and his replacement Kevin Holland leave no stone unturned in the quest to safeguard the future of this workforce. The reality is that if this was a start up foreign investor everything would be done to ensure its success. This deal offers a new company, effectively a start up and all support that can be given should be given", Mr Thompson said.

Yesterday afternoon, Jeff Wright i ssued a statement saying the failure to complete a deal lay with industrialist Jo Bamford.This was after Mr. Bamford had stated he had been asked for a ‘significantly larger sum’ in relation to the deal.

Mr. Wright’s statement read: “The facts of the matters are as follows - Mr. Bamford was advised on Friday, October 4 that any deal would include the entire premises at Galgorm including the factory, fixtures and fittings.

“These were available for lease or purchase. Mr Bamford sought to gain unrelated additional farmlands which were not for sale. It is important to note that no other bidder sought at any time to link the farmlands to the business purchase.

“Mr. Bamford, as his statement confirms, did not deal with these matters until 10am this morning. In his response he insisted he would not proceed with the deal unless the farmlands were included.

“Mr. Wright does not recognise the explanation provided by Mr. Bamford as to why he failed to conclude the purchase of the business.

Earlier on Thursday, Mr. Bamford had issued his own statement of clarification, saying:

“At 10am this morning I made an offer to the Wright family to match the asking price for the Wrightbus factory and land.

“This includes a sum to match the amount that the factory and associated land was purchased for two years ago from JTI.

“Mr Wright has since refused this offer and has now asked for a significantly higher sum of money.