Mood as miserable as weather as Wrightbus saga drags on 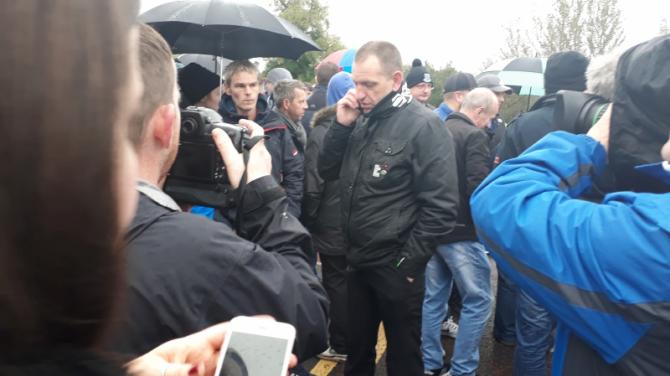 12 noon: THE mood of ex-Wrightbus workers matched the miserable weather which prevailed over Ballymena this morning.

Around 150 to 200 ex workers and supporters are mounting a vigil at the factory gates and so far it's been wet, cold and - to be honest - disheartening.

Hopes that something could be salvaged from the Wrightbus collapse seemed to be dashed just after 10.15am when Unite representative George Brash informed the men and women that landowner Jeff Wright had issued a statement essentially saying 'no deal'.

To be honest, the mood at that stage was not one of anger or frustration as most people would imagine - it is best summed up with the word 'confusion'.

"Did he seriously say 'no deal'?," asked one man. Heads round him nodded. It seemed surreal.

A few minutes later there was an update from the union official who, having spoken to the administrator, said there was still potential for a deal despite in his words, 'Jeff (Wright) changing the goalposts'. As far as he could tell them the deal was 'still hanging by a thread.'

The response this time was clear and uneqivocal. Not surprisingly there was a great deal of exasperation and the TV cameras will be well to blot out the round of expletives which greeted the news.

In a statement Jeff Wright said the sticking point was farmland which he does not consider to be part of the factory site.

He said failure to complete a deal is "deeply regrettable, especially after the exhaustive efforts all of us involved have gone to in providing every possible support".

The Ballymena business was placed into administration and put up for sale in September.

The Wrightbus premises are owned separately from the manufacturing business and held in a company called Whirlwind Property Two, which is not part of the Wrights group and is therefore not under the control of the administrator.

The property company is controlled by Jeff Wright, the former owner of Wrightbus.

English industrialist Jo Bamford wants to buy the Wrightbus business and the factory through his Ryse Hydrogen company.

Mr Wright said that he hopes the firm's administrator, Deloitte, "have not been side-tracked by the Bamford engagement and can now put their energies into delivering a deal by working with the remaining bidders to secure the future of Wrightbus and the jobs in Ballymena".

"If the answer is that we cannot get the deal consummated, in terms of the land sale deal, then I'm afraid the worst of all situations prevails and we're left with liquidation of assets of the company," he said.

"It's either the continuation of building the best buses produced in the world or it's the end of bus building in Ballymena."

The North Antrim MP said Mr Bamford told him on Tuesday that jobs would be created within two weeks, if a deal is made.

"The Wright family have made a mammoth contribution to Northern Ireland over three generations and this maintains that rich history," said Mr Paisley.

"Everyone needs to put their shoulder to the line and get this deal over the line."

In his statement Mr Wright said Mr Paisley's role as North Antrim MP had been "unhelpful to say the least" and advised that he left "the business of deal making to the professionals at Deloitte".

Wrightbus workers await their fate in the rain as horse-trading over sale continues.

Unite the union has received no response to request to meet with former Wrightbus owner Jeff Wright.

Unite Regional Officer for Wrightbus, George Brash, challenged both sides in the ongoing negotiations surrounding the sale of the stricken bus builder to move quickly to reach an agreement that would safeguard the livelihoods of the workers.

“These are workers who are already having difficult conversations with their children about what Christmas will bring.

“As these negotiations are being dragged out by horse-trading, the feeling of indignation among these workers, whose sole objective is to get back to work, is rising.

“We understand that an outline deal had been arrived at yesterday but that this morning further changes were made by Jeff Wright which threw the entire negotiations into uncertainty.

“For our part Unite has sought to engage directly with Jeff Wright but as yet our request for a meeting has gone unanswered. We are calling on all sides, in particular Jeff Wright, to do the right thing and adopt a sensible approach that will open the door to a future for these workers”, Mr Brash concluded.