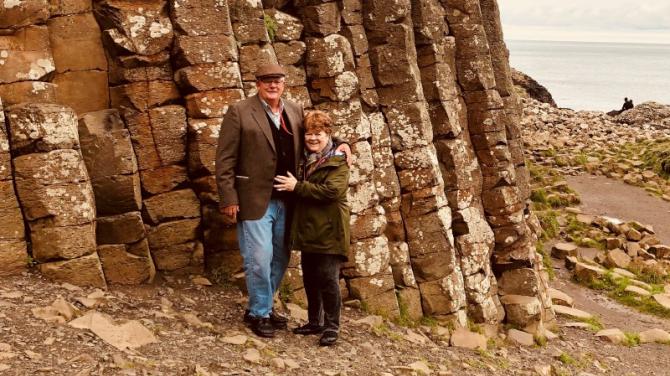 AN ancestry search has led an American couple all the way from Illinois to Ballymena.

Dave McClure, along with his wife Colleen, recently spent three days in the town on the hunt for information about his great great grandparents William James McClure and Sarah Montgomery McClure.

The couple, believed to be from the Ballymena/Ballymoney area, had a son Robert Montgomery McClure who was born on May 5, 1843.

His passage to America was paid by a James Gillan who emigrated to Illinois and is believed to have lived in the Ballymena/Ballymoney area. Robert worked for James for 7 years, married his daughter Sarah, and bought his own farmland nearby.

Dave explained that during his search for information he hit a “dead-end” and so he decided to visit Ballymena in the hope of finding out more about his family tree.

The couple stayed at the Tullyglass House Hotel and Dave’s first port of call on Wednesday of last week was the Ballymena Guardian office.

He said: “I really wanted to come to Ballymena to try and find out more about my ancestors. I'm here for three days so I plan to try and find some McClures in the area and see where that takes us.

“I was in Belfast checking the records there but I didn't find much so I am hoping we might get a bit closer to finding out something here in Ballymena.”

Before leaving to return home Dave explained that he had not uncovered much more about his McClure ancestors, however, in the past few days he “met such wonderful people in my search”.

Dave continued: “The librarians in Ballymena sent me to Clough, where I met Norm the postmistress. She sent me to Glarryford where I visited the Killymurris Presbyterian Church cemetery before heading to Ballymoney where Daniel Gillan at the Tower Pub sent me to the town hall museum where Paul put me in touch with genealogist Kathleen by phone.

“After a twenty minute conversation I decided to continue conversing with her by email when I return to the States.

“I didn't uncover any new facts about my McClure ancestors but I believe I have walked where they trod and looked upon the land they once viewed.  If they were anything like the people of this area I am very proud of them indeed.”

Dave, a keen writer, explained that his father was a dairy farmer and he has three brothers and a sister.

He said: “My brothers and sister are keen to hear all about the trip and I will be telling them all about how great and friendly the people of Ballymena are.”

As well as Ballymena the couple visited Dublin, Donegal, Belfast and the Giant's Causeway before travelling on to Scotland and then flying home.

If anyone has information that may be of help to Dave you can contact him via email daveintheshack@gmail.com