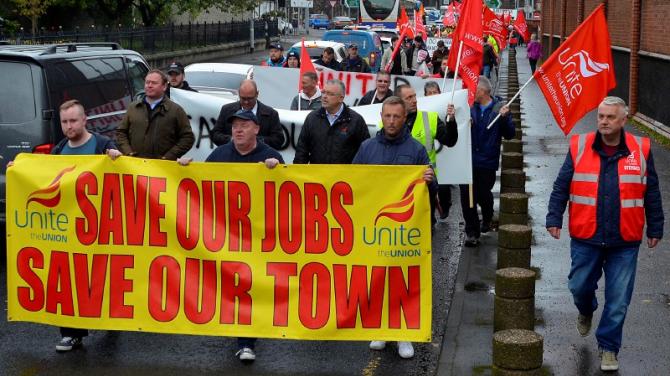 WHEN I commenced my career in local journalism it was at the height of the troubles in Northern Ireland.

The country was at a monstrous level of murder and mayhem as republican and loyalist paramilitaries blasted our streets with bullets and bombs.

It was a period of despair and darkness which cast a giant shadow over all our lives.

At the same time, the UK was undergoing the radical industrial and economic reforms known as 'Thatcherism'. Towns and villages in the old industrial heartlands were reeling from factory and pit closures.

'Gissa Job', the pitiful plea from Yosser Hughes, was on everybody's lips. And if you don't know who Yosser was then it's time to consult google.

However, while a lot of Northern Ireland towns were plunged into social and economic chaos as large firms shut their doors leaving entire populations 'on the broo', Ballymena existed in a seemingly indestructible bubble of prosperity thanks to the employment provided by Gallaher, Michelin and a host of other medium level enterprises.

Wrights was a relatively small scale coachbuilding firm at that time. The rise to heady heights of multi-million pound deals and iconic 'Boris Buses' was well in the future.

Thus, when most weekly newspaper journalists received the Government unemployment stats (by post of course) they would be writing headlines about job losses and rising numbers thrown on the dole scrapheap.

In Ballymena we almost revelled in our (mostly) affluent status. The town and district was consistently top of the pops when it came to employment figures and this was reflected on our shopping streets with high levels of commercial activity right across the retail and service sector.

It was, looking back, a golden era of new housing construction, greater disposable income and better opportunities for youngsters. And I stress again that the Ballymena experience was by no means typical of the rest of Northern Ireland.

While two shopping centres were going up in the heart of Ballymena other towns were boarding up premises as the bad times hit hard.

You just have to look around our local villages to see how the wages earned were ploughed back into the local economy by local people.

New developments sprouted up like never before and if you had a steady job in the 'Mich' or Gallaher's there was no lack of money to invest in a new home, a bigger family car and a bigger weekly shopping basket. Oh, and then there was the extra money for going out for meals, having your hair done or a new wardrobe of clothes.

And that was pretty much the scenario experienced by the vast majority of local people right through the 90s and the early 'noughties'. Yes there were blips on the affluence chart and not everyone was coining it. Even during this period the area had several wards branded as 'area of high social deprivation' - a euphemism for poor.

Then we hit the crash of 2008 and the first hints of what was to come. Banks went into hedgehog mode, spending levels dropped and people began to worry about the long term.

Of course, this was a worldwide phenomenon but it did have local implications as firms which had overstretched themselves in the afternoon sunshine of easy credit found themselves running for cover as the hailstorm of recession began to blow.

However, we still had the big players .. Gallaher was now JTI, Michelin was still going strong despite the annual expressions of fear from unions during wage negotiations and Patton Construction was at its very zenith with developments and projects right across the UK. For Ballymena, things were still pretty rosy.

And a firm which started in a shed down the back of Warden Street was beginning to make a name for itself in the public transport world with innovative products at the cutting edge of technology. They had even moved into bigger premises and rebranded as 'Wrightbus' ..

But how hard and painfully have the mighty fallen?

The area once envied for its range of high paying, family rearing, steady jobs is now facing up to a future which is, in all probability, pretty bleak.

In quick succession we've lost Patton's, JTI and Michelin. Their departures affected a much wider circle than just their direct employees. Lots of smaller firms went to the wall or laid off workers.

Patton's failure comes closest, it would seem, to the situation at Wrightbus. The building firm went under in just a few days leaving staff to seek out state level redundancy packages.

While the probable demise of Wrightbus has been a much more drawn out and publicised process, it looks increasingly likely that staff there will find themselves in the same situation in relation to redundancy payments.

And that is very significant since JTI and Michelin workers left in a methodical fashion and with (in most cases) a reasonable package based on years served etc.

A lot of the men and women who were employed at those two firms were in an age range where, to put it bluntly, the payout could not have come at a better time. Others were able to use their packages to tide them over until they found some other form of employment.

Ironically, quite a few of those workers found themselves a post at Wrightbus in recent times.

Make no mistake about it. The Ballymena area is never going to be the same again and there is absolutely no point adopting an ostrich position. I have no solutions to the state we find ourselves in. I don't think politicians at any level have any meaningful solutions either. I'm quite sure we will see all manner of talking shops, strategies and sustainable programmes floating about on this issue over the coming weeks and months - but unless we can attract some large scale firms who pay decent wages and offer sensible conditions to this town then it really will be a lot of hot airr.

My sympathy to all those affected by the latest traumatic events at Wrightbus. I hope my 'venting' here does not cause offence. It's from the heart of a Ballymena man.