Wrightbus rally at noon: 'If these jobs are lost then this community faces the prospect of post-industrial decline' - Union message 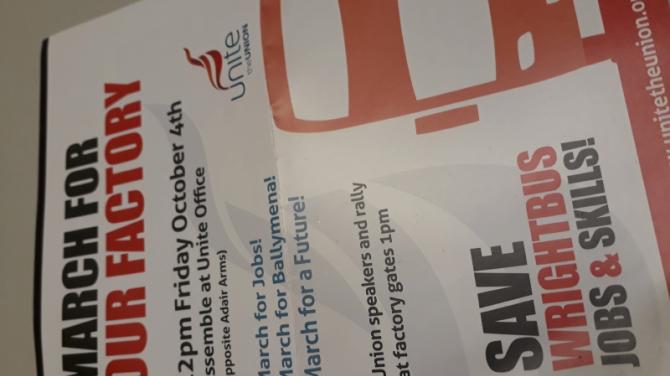 Unite has issued another appeal for the public to come out and show their support for Wrightbus workers at a ‘jobs rally’ in Ballymena this lunchtime.

The rally will assemle at 12 noon at the Unite Offices at the Pentagon before marching to Galgorm for speeches at the Wrightbus factory gates.

Meanwhile, the union has urged administrators to take imaginative approach to ensuring continuity of employment as employed successfully with Harland & Wolff

Unite Regional Secretary Jackie Pollock reiterated his union’s call for the UK government to act to secure a future for Wrightbus and to safeguard jobs and skills.

“Saving the livelihoods of the 1,200 Wrightbus workers is not just a moral imperative but of vital importance to the social and economic future of Ballymena. This community has suffered so much already with repeated large-scale closures and job-losses in recent years.

“Unite feels that the critical obstacle to the prospect of successfully saving the jobs and skills of this workforce of 1,200 is the question mark hovering over the ownership of the site itself. We are calling on Jeff Wright to do the right thing and ‘hand back the land’ to the people of Ballymena”, Mr Pollock said.

Unite Regional Officer for Wrightbus, George Brash added: “Ballymena stands at a crossroads. If we allow these jobs to be lost then this community and indeed the wider region faces the prospect of post-industrial decline; if we succeed in saving these jobs and this production, then the road is open to an economic renaissance.

“Wrightbus workers hold the key to growth in their hands. Their skills and expertise are vital for the future public transport needs of Northern Ireland and further afield. The renewable energy powered buses that this company were developing will become the new normal – the demand for these buses will drive investment and job creation above anything we have witnessed to date. Northern Ireland cannot simply sit back and watch as this historic opportunity is lost.

“We are urging the wider Ballymena community to join our march and rally for jobs and a future – we need to keep on the pressure to secure a win for all”, Mr Brash concluded.