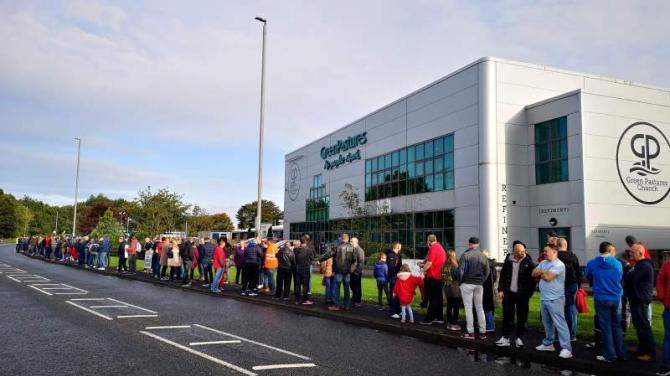 Former Wrightbus staff will call for urgent action to help save jobs at rallies in Ballymena this week.

Today (Tuesday) it is understood that a job fair in the town will have in the region of 1500 jobs of various kinds on offer.

Anne Donaghy, Chair of the Manufacturing Taskforce and Chief Executive of Mid and East Antrim Borough Council, said: "An appeal has been made right across Northern Ireland to identify suitable manufacturing jobs for those affected by Wrightbus entering administration.

"We have been overwhelmed by the response and can confirm that to date we have more than 70 employers with vacancies who will be present at our job fair in The Braid this Tuesday."

Wrightbus went into administration last week with the loss of more than 1,200 jobs.

Unite the Union has confirmed that a rally for the workforce and their families has been scheduled for Wednesday, October 2 at 4pm at the Ballymena Showgrounds.

Meanwhile, on Friday, October 4 at 12noon there will be a ‘Save Wrightbus Jobs & Skills’ march leaving the Unite Ballymena offices and proceeding to the gates of the Wrightbus factory where a second rally will be held.

Unite Regional Officer for Wrightbus, George Brash, said: “Our members will accept nothing less than the action needed to reopen the doors and let them get back to work. This is a fight not just for the twelve hundred workers facing redundancy but for the future of Ballymena. It is not a fight we can afford to lose.”

At the weekend a major protest was held at the gates of Green Pastures Church where Wrightbus main shareholder, Jeff Wright, is lead pastor.

Hundreds of ex-employees yesterday attended a redundancy clinic in Ballymena following the firm's collapse. Former workers queued to fill in claim forms almost a week after the bus manufacturer crashed into administration.

The Wright family, who founded the bus-making company in 1946, said the collapse of the business was due to a big fall in demand for buses in the UK market.

Meanwhile, a debate in Westminster yesterday heard calls for bus operators to be encouraged with "economic assistance" to buy British.

DUP MP Ian Paisley pushed for the commitment after seeking assurances that potential investors in Wrightbus know what British government support looks like, in terms of research and development, soft loans or grants.

Asking an urgent question in the Commons, Mr Paisley asked Northern Ireland secretary Julian Smith: "Could he recognise that the arm's-length bodies, such as Translink and First Group and other bus buyers, need to be encouraged directly with economic assistance to buy more British-made buses?

"Could he ensure in future all bus orders go through British companies therefore supporting British jobs and British investment?"

Mr Smith said the government is making any potential Wrightbus bidders aware of what support could be available, adding: "This is a commercial process.

"It's been managed by an administrator and many of the actions are required to take place at a devolved level.

"But we will continue, and I do continue, to speak actively to all stakeholders in this issue and I am conducting meetings in the course of this week."