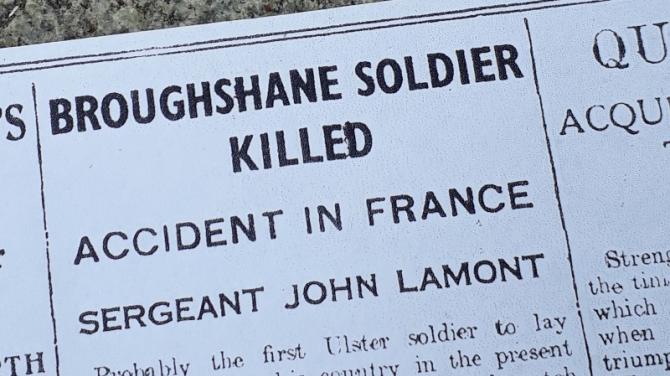 Eighty years ago, on September 1, 1939, Hitler invaded Poland from the west.

Now, 80 years on, the Ballymena Guardian has been looking back at how the outbreak of war was reported here at home and what impact it had on people going about their daily lives.

This will be the first in a series of features on the topic and we are keen to hear the stories of local involvement in the conflict both on the home and fighting fronts.

To this end, we are asking if any readers out there have memorabilia, photos or stories to share with us. At this stage we are specifically interested in the early stages of the war - the period known at the time as ‘the phoney war’ prior to the German invasion of France and the Low Countries in 1940.

While it may have been a low key conflict on land, it was a totally different scenario at sea, so we would be grateful for any information from local people whose family members served in the Royal or Merchant Navy in those early months.

If you can help with this ongoing feature please send details to editor@ballymenaguardian.co.uk

The Ballymena Observer, in their September 8, 1939 edition ran the headline ‘Britain and France at war with Germany. Nazism must be finally overthrown.’

The paper gave details of how war was announced, with an 11.15am announcement over the wireless from the then Prime minister Neville Chamberlain saying that after only 21 years ‘we are again in a European conflict.’

Local people were told of a war cabinet that had been assembled, with a certain Mr Winston Churchill being appointed as First Lord of the Admiralty.

No warning was given to Poland before German troops crossed its border and started bombing open towns. The Prime Minister told the House of Commons: "In these circumstances there is only one course open to us."

Ballymena folk were told that the government were preparing for three years of war. The paper reported that: "In the great national effort which is implicit in the war cabinet decision, the civil needs of the country will be borne in mind, as well as the importance of maintaining the export trade.”

It was reported that the government made a number of pre-cautionary measures in order to protect people from the dangers of war.

Children were evacuated from London, and some were even sent to Ballymena from other bigger cities, including Belfast for refuge with local families.

A local Evacuation Committee was established with a Mr A. L. McClelland being appointed the chief billeting officer for the Borough. Many child evacuees were expected from Belfast as well as further afield, therefore scores of billeting assistants volunteered to help with the children, and many motorists gave the use of their cars to transport the city children Air Raid precautions were also put in place and many women volunteered to carry out first aid in shelters if needed. Council employees were given lectures on poisonous gases and how to deal with them.

Other emergency measures such as the 'blackout' applied to Northern Ireland.

The Ballymena Observer told local people that to avoid accidents during black out, pedestrians should keep to the footpaths as much as possible as: "Those who walk on roadways should realise the danger not only to themselves but to drivers of cars."

Cyclists were warned to stay off the road when possible but if they had to venture out they were only to have illuminated red rear lights and not only a reflector.

A white line was painted up the middle of the streets of the town so as to make it easier for motorists to see where their side of the was.

However, the paper reported that: "Some careless motorists drove over the line before the paint was dry" meaning much of the work will have to be done again.”

Shops were warned about lighting restrictions and window screening. It was not enough to pull down a yellow or red blind as absolutely no light was to show through at the front, rear or through a skylight of a dwelling.

Houses were also required to have a light trap so that when a door was opened, no light went onto the street.

Motorists were warned that flashing their headlights on and off was prohibited, while the light from lamps had to be white and not shown in an upward position.

Flashing torches used by pedestrians to help them find their way were also prohibited, with warnings that police were on the lookout for and offenders without the proper screaming or by using lights during blackout hours. There was heavy punishment for breaking the rules, such as a fine, imprisonment or even both.

There were calls for volunteers for the auxiliary fire service and also for stretcher bearers. There was also an appeal for volunteers to fill sandbags at the Waveney depot.

Sirens at the gasworks, Braidwater Mill and the Phoenix factory were designated to give warnings should there be an air raid while all other sirens at other times throughout the country would remain silent.

Certain halls around the town were designated as auxiliary hospital centres and vehicles were also earmarked as ambulances.

The Ulster Farmers Union announced they would co-operate with the Government and place their resources and services at the disposal of the Ministry. Farmers made plans to plough more fields and to sow oats, barley, flax, potatoes and wheat. It was essential that farmers made their farms more self-supporting than in the past.

A local Food Control Committee was established, with the Town Clerk at the time, Mr T. B. Whiteside being appointed the Food Executive Officer for the Borough of Ballymena.

The local food office was located at the Town Hall. Doctors were also affected by the national emergency of war. The Doctors of Ballymena and District took an advert in the Ballymena Observer saying that anyone who required a house call was to have a message left at the doctors house before 10am.

This was necessary due to the rationing of petrol so a doctor would avoid repeated journeys to the same street or district in the same day and also due to the difficulty of driving a car during the black out.

Of course the war hit the United Kingdom with devastating effects.

There were an additional estimated 19 to 28 million deaths from war-related disease and famine.

Some evidence suggests that the numbers of volunteers from Northern Ireland in the Second World War was considered disappointing by contemporary standards. In 1943, for example, British Prime Minister Winston Churchill negatively characterised Belfast youths as 'young fellows of the locality who loaf about with their hands in their pockets impeding recruiting and the work of the shipyard.'

However the war hit home especially hard for the Lamont family in Broughshane when young Sergeant John Lamont was killed in France.

He was a member of the 2nd Bn. Royal Inniskilling Fusiliers.

He was an early casualty of war and his death was reported in the local paper. Hispassing was referred to as 'probably the first Ulster soldier to lay down his life for his country' in the war.

He was the son of Mr Hugh and Mrs Ellen Lamont from Raceview in Broughshane. They received a telegram informing them of their sons death which said he was accidently killed on September 19. He was buried on September 21, 1939 in Le Mans West Cemetery in Sarthe, France. The ceremony was attended by four officers of the regiment and the brigadier. The pipes and drums also attended. John Lamont was only 22. The paper gave a little background on the young sergeant, saying he had been in the army for five years and had served a spell of duty in Palestine. Before joining the army he had been employed in White's soutch mill in Broughshane.

Sadly, it was reported that one day after his parents had been informed of his death, they received a last letter from their son.

In the letter John told his parents that he was going to France and that if it was the will of God that he should lose his life he hoped to meet his father and mother in heaven.