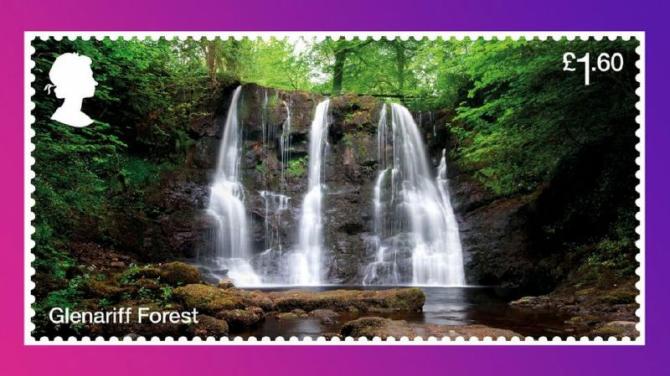 A much-loved beauty spot just a few miles from the centre of Ballymena has been celebrated on a new set of stamps that show off the beauty of the UK's forests.

Glenariffe Forest Park’s famed Ess Na Grub waterfall is featured on the £1.60 stamp released to coincide with the 100th anniversary of the Forestry Commission.

Amazingly, despite the proximity of the Forest Park to the town, a surprisingly large number of local people have admitted they’ve never been there!

Glenariffe offers much more than a walk amongst the trees.

Aside from its breathtaking waterfalls walk - ideal for selfies - the park boasts superb ‘high walks’ with wonderful views out towards Scotland.

In the past few years, large sections of the forest have fallen victim to tree diseases but the resulting cutbacks have added to the rugged nature of the terrain and if you are looking for a tough but rewarding ‘wellbeing walk’, don’t miss it!

The Forestry Commission is a non-ministerial department of the government which manages forests owned by the public and also regulates public and private forests in England.

It is responsible for protecting, improving and expanding forests and woodland in England.

Scotland, Wales and Northern Ireland look after their own woodlands.

The Forestry Commission was founded on 1 September 1919. Its job was to reforest the UK for timber after World War One had devastated huge areas of land for the war effort.

Philip Parker from the Royal Mail said about the new stamps: "On the Forestry Commission's centenary these striking new stamps celebrate the beauty and tranquillity of our public woodlands, and the inspiring range of environments which receive hundreds of millions of visits each year."

Other forests featured on the new stamps are Glen Affric in Inverness-shire, Sherwood Forest in Nottinghamshire, Westonbirt in the National Arboretum in Gloucestershire, Coed y Brenin in Gwynedd, and Kielder Forest in Northumberland