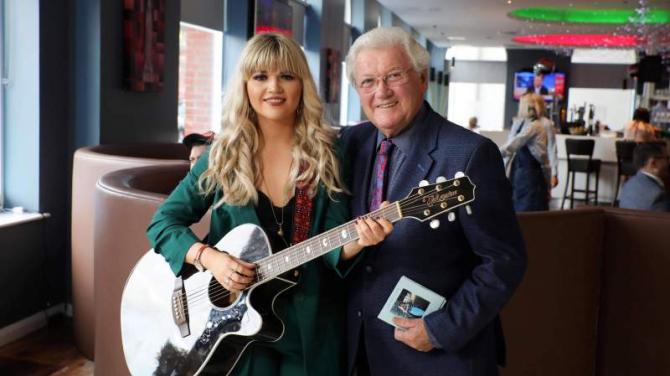 Ballymena girl Erin Fullerton has released a debut single and launched it at the prestigious Belfast Songwriters festival.

It took the local singer-song writer - part of the Ballymena based Starling Entertainments stable - only two hours to pen ‘The Best Thing’, her first single, in what was a “frantic but ultimately rewarding experience.”

Erin, who performs gigs locally and sings at weddings all over the country, is the granddaughter of popular sport pundit and local legend Jackie Fullerton.

Jackie, although known for his sports journalism and past football career, is no stranger to a singing role!

She is therefore upholding the family tradition, and in between completing a music technology degree at Queen’s University and working shifts at the popular Crown Bar, she has taken her first steps into the recording world.

“I was fortunate that I got the hook for the chorus quite quickly,” said the 21-year-old, who released the tracks as part of the Panarts Belfast Songwriters festival.

The song is a mix of vibrant folk pop sound with rich harmonies and combined with Erin’s soulful voice it seems a perfect debut!

Erin explained: “Panarts director Colin (Magee) and his wife Anne met me for a coffee in May and asked if I’d like to launch a single at their songwriting event at the end of July.

“It was a quick turnaround, but too good an opportunity to turn down.

“I recorded 'The Best Thing' with Jonny Fitch (Online Music Producer) who runs his own studio in Belfast and recorded the video at Chocoa in Ballymena.”

However now Erin, who was the pianist at Carl and Christine Frampton’s wedding in 2013, is eager to focus on her own material in the months ahead.

She continued: “I love gigging, singing at weddings and putting my own spin on covers, but I also have a passion for song writing.

“I’ve had a very positive response to ‘The Best Thing’ and that has given me the encouragement to put more of my own material out there.

THE BEST THING by Erin Fullerton is available on Spotify and Apple Music.