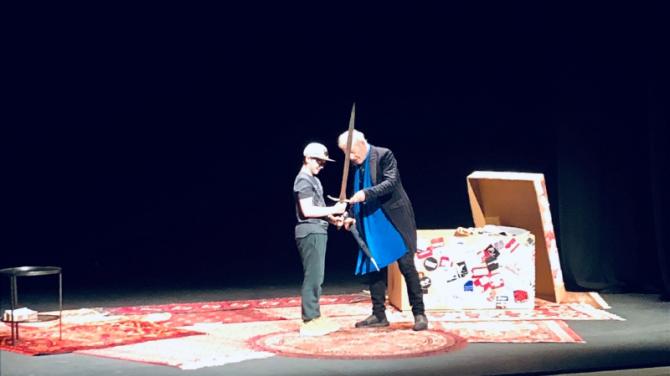 Mid and East Antrim welcomed Sir Ian McKellen to the Braid as part of his On Stage Tolkien, Shakespeare, Others and You tour.

The world-renowned actor wanted to do something special to celebrate his 80th Birthday and there is no better way to celebrate than an 80-date UK tour.

Sir Ian had made the decision, prior to the tour, that all profits would be donated to specific causes relevant to each theatre that he performed in.

His career spans genres ranging from Shakespearean and modern theatre to popular fantasy and science fiction.

He has also received nominations for two Academy Awards, five Primetime Emmy Awards and four BAFTAs. He achieved worldwide fame for his film roles, including the titular King in Richard III (1995), James Whale in Gods and Monsters (1998), Magneto in the X-Men films, and Gandalf in The Lord of the Rings and The Hobbit trilogies.

Mass cinematic fame has come from his role as Gandalf in Lord of the Rings but in his Ballymena performance Sir Ian provided some theatrical magic of his own.

Standing on a bare stage he took the audience on the journey of his fascinating career, he opened up about his personal life and included the audience throughout with regular interaction.

Interestingly, Sir McKellen’s great-great grandfather, James McKellen, was a minister in Ballymena before leaving in 1840.

While his family have since settled in England, his visit to the Braid provided the perfect opportunity for him to discover his roots while also raising funds to support a community theatre programme at the Borough.

His intimate show at the Braid was a great success.

It was a personal yet magical performance as his biggest fans enjoyed an evening of warmth, wit and wizardry.