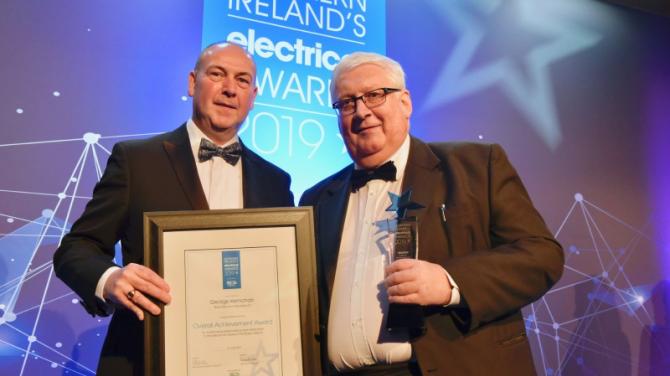 A standing ovation greeted George Kernohan as he took to the stage to receive the Overall Achievement Award at Northern Ireland’s Electrical Awards.

Hosted by Electrical Magazine, the gala awards ceremony took place on Friday June 21 in the Crowne Plaza Hotel in Belfast.

The Managing Director of Braid Electrical Services in Ballymena was overwhelmed at receiving the award.

“I’m absolutely delighted,” said George. “I have always just run a smallish company in Ballymena and tried to provide a good service. Winning this award is even better because it was voted for by my peers and that makes it extra special.”

George Kernohan has been a leading figure in the electrical industry in the Ballymena area for a number of decades, providing training and employment for a large number of people.

Through his relationship with companies such as Michelin and JTI Gallaher he helped keep the wheels of major industry turning in his home town.

He also plays a key role in his community providing support and guidance to neighbouring businesses and assistance to local contractors during times of need.

Describing him as one of life’s gentlemen, Northern Ireland’s Electrical Awards judges agreed that George brings great honour to the industry.

It was a five-year apprenticeship and he worked his way up until 1975 when he and his brother-in-law, Mr Bobbie Currie took over the running of the electrical contracting side of the business. The contracting side was moved to Hill Street, Ballymena in 1978 where they were made directors of the new company Nicholl Bros Elect Ltd. Eventually they moved to Railway Street due to growth of the company.

Bobbie and George took up ownership of the company in 1991 and changed the name to Braid Electrical Services Ltd. They continued to work successfully with companies such as Michelin Tyre Company PLC, Gallaher’s Tobacco Industry and North Eastern Education & Library Board as their main clients.

Bobbie retired in 2006 leaving George to continue on with the work.

Hard times came when Gallaher’s and Michelin decided to pull out of Northern Ireland and the Education Board decided to go measured term.

George’s belief in providing a good service to a high standard using good reliable people continued to open doors elsewhere in places such as Wrightbus, Norbev, Devenish Nutrition, and Caterpillar. They continued to carry out the work for 02 n Northern Ireland through Taylor Patterson and McKillen’s Shoes who they have worked for over thirty years.

George continues to train his own people and reckons he has facilitated nearly 100 young people to achieve their goals of becoming an electrician.