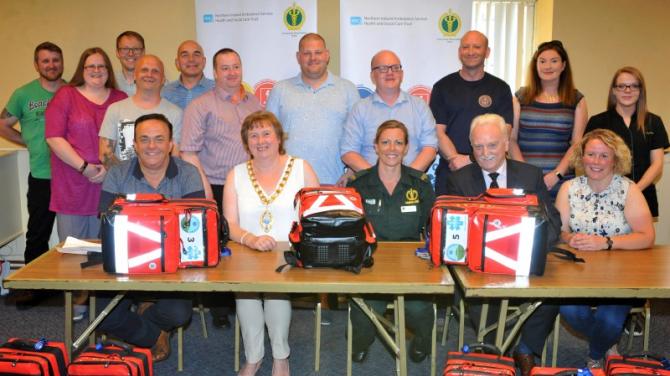 AFTER a year of planning and preparation, the new Braid Valley Community First Responder group is now trained, equipped and ready to respond to emergencies in the Ballymena, Broughshane and Kells areas.

Their volunteers have been trained by the Northern Ireland Ambulance Service’s Community Resuscitation Development team to deal with emergencies including cardiac arrest and impaired consciousness. Community first responders (CFRs) are there to support NIAS in its life saving and caring work.

Though they will be dispatched simultaneously, they will often arrive with the patient first because they are so local

In cases such as cardiac arrest, that is vital.

Early CPR and defibrillation significantly improves the chance that the patient will survive.

The group had its official launch at Houston’s Mill, Broughshane, on July 15.

The Mayor of Mid and East Antrim, Councillor Maureen Morrow, presented the newly qualified volunteers with their responder kits, each with its own defibrillator.

These kits were bought with grants from organisations including the Borough Council and the Big Lottery Fund, and with contributions from local people and groups.

The first two kits were funded by Braid Valley Vintage Enthusiasts and two of their directors, James Harkin and Sammy Millar, were there to present them.