Record crowds at The 148th Open 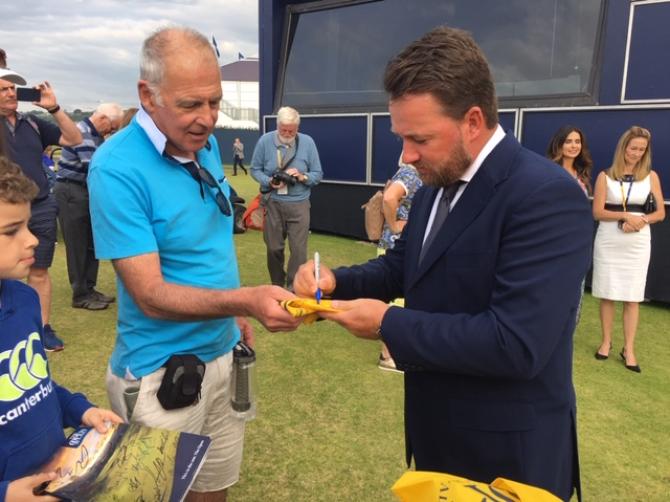 Massive crowds have attended the practice days of The 148th Open at Royal Portrush.

A RECORD breaking crowd of 237,750 is attending The 148th Open at Royal Portrush, setting an attendance record for a Championship staged outside St Andrews.

This year’s attendance surpasses the crowd of 235,000 who attended Royal Birkdale in 2017 and the 237,000 mark set at St Andrews in 2015 making it the second largest Championship ever.

Martin Slumbers, Chief Executive at The R&A, said: "This is a huge week not just for The Open but for golf as well. We are making history with a record attendance for a Championship staged outside of St Andrews and the levels of excitement among fans this week have been phenomenal.

" said last year that big time sport needs big time crowds and we certainly have that at Royal Portrush as we stage the biggest sporting event ever to be held in Northern Ireland. The eyes of the sporting world are firmly set on Royal Portrush.

"We would like to thank all the fans for their passion and enthusiasm as we look forward to finding out who will lift the Claret Jug on Sunday. The Open would not be the success it is without the spectators."

Overall, 30,000 fans under the age of 25 are attending The Open, which includes 21,000 children under the age of 16 who attend free of charge thanks to the long-running Kids Go Free initiative.

The Open Camping Village continues to prove a popular accommodation option for fans with more than 6,300 fans booking a place to stay at on site this year, up from the 4,000 spectators who stayed at Carnoustie in 2018.

A third of those fans staying at the campsite are under 25 years old meaning that The R&A has now provided over 8,000 free bed spaces for under 25s over the first four years of The Open Camping Village

The 149th Open will take place at Royal St George’s from 12-19 July 2020 and fans eager to attend the Championship’s return to the Kent links for the first time in almost a decade can purchase tickets by visiting TheOpen.com, provided they are members of The One Club.

Ticket and hospitality sales for Royal St George’s have been the fastest in the history of The Open with Weekly Tickets and Weekend Bundles having already sold out in record time.

Membership of The One Club guarantees priority access to tickets and is free to join by registering via TheOpen.com/The-One-Club and fans are being advised to purchase their tickets early to avoid disappointment.