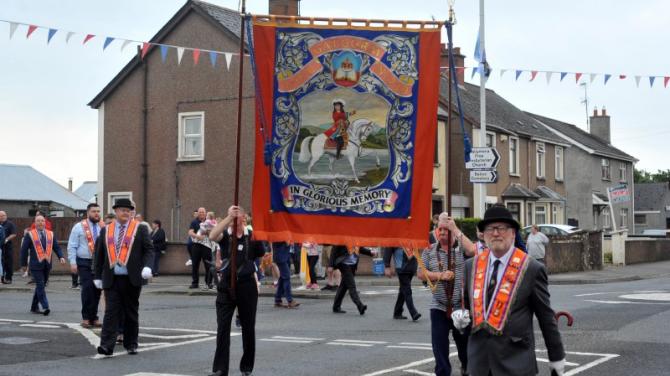 For the first time in many years the Ballymena Orange parade will deviate from the standard ‘town route’ and head for the village of Galgorm - home to this year’s host lodge.

The guest speaker at the field will be the past Grand Master of the Grand Orange Lodge of Ireland, Robert Saulters.

Other senior Orangemen in attendance will include County Antrim Grand Master, Robin Matthews, and Grand Chaplain Rev. Ian McClean who is also a member of the host lodge.

This year one of Ballymena’s oldest lodges ‘Ballymena Golden Star L.O.L. 491’ are celebrating the 200th anniversary of the formation of their lodge. There will be two new banners on display this year belonging to Slatt L.O.L. 475 and Ballygarvey L.O.L. 746.

Meanwhile, Carnlough will host the members of the Braid District Orange Lodge for the first time since 2013.

Orangemen from 11 Lodges, accompanied by 9 bands and 2 lambeg drums will leave the assembly field at South Bay at 12 noon and proceed through the village to the demonstration field on the Largy road.

Amongst those on parade will be Linamurrican Flute Band who are making a welcome return following a short absence in recent years.

Platform proceedings will be chaired by Worshipful District Master Des Gray and principal speakers will include William Logan (Belfast City Mission) and Bro. Robin Swann (Ulster Unionist Party leader). The parade will leave the field at 4.00pm and return through the village before the Lodges depart for their own respective areas.

The distinctive sound of the Lambeg drum will be very apparent at this year’s Triangle Combine Parade, held in Ahoghill. A procession of 16 Lodges, accompanied by nine bands will take part in the demonstration, which is hosted alternatively in Ahoghill, Cullybackey and Portglenone.

The main parade is due to commence from the Galgorm Road (main Ballymena line) / Killane Road junction at 12.30pm, and then proceed towards the village centre via the Ballymena Road, Main Street, The Diamond, Portglenone Road, Glebe Road, Church Street, returning through the Diamond area to the Village Playing Fields on the Cullybackey Road.

Guest speaker on the day will be Rev. Sherrard McKay, Chaplain of Cullybackey District