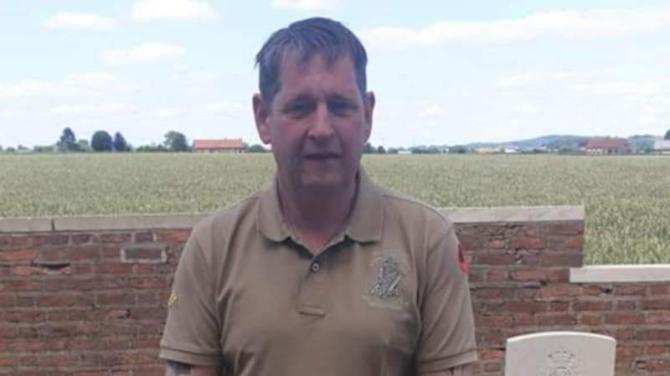 IT was a proud - and poignant - moment when Ballymena man John Herbinson visited the grave of an ancestor on the World War One battlefields last week.

Mr. Herbinson, a member of the 12th Royal Irish Rifles Association paid tribute at the last resting place of his great uncle Sgt Robert Herbinson who was killed in action on August 27, 1916 in the Ypres Salient.

Sgt. Herbinson had survived the slaughter of the first day on the Somme where he had performed gallantly under fire and subsequently moved with the remainder of the 36th (Ulster) Division to the British sector in Belgium. The 12th RIR Association were on their annual pilgrimage to the WW1 battlefields, taking part in the July 1 ceremonies on the Somme before visiting other sites.

Ballymena Observer, September 15, 1916 - Miss Herbinson, 26 Hill Street, Ballymena, has been informed that her brother, Sergeant R. Herbison 12th Royal Irish Rifles (CAV) was killed in action on Sunday, August 27th. Sergeant Herbinson was, prior to joining the colours, an employee in the Phoenix Weaving Factory, Ballymena.

He was a member of the Ulster Volunteer Force and of Ballykeel LOL 472. His brother, Lance Corporal James Herbinson, Royal Irish Fusiliers, is serving at the front. A letter received from the Rev. A. Gibson, Chaplain to the Central Antrims, states that Sgt. Herbinson was killed while out on duty in no-man's land. He states:

"He was a most excellent soldier and a very good NCO and the regiment will miss him very much. He had done very fine work when the battalion went into action on 1st July and I have heard from his officers how nobly he did his duty that day. He was buried in a little cemetery near the firing line."

Lt. W.B. Stuart (a Ballymena officer who was later killed in action himself) wrote: "Dear Miss Herbinson, I cannot tell you with what regret it is hat I am writing to tell you of the death of your brother. He was killed by a bullet passing through his brain so that I am glad to say that he suffered absolutely no pain. I have known your brother personally for nearly two years and I feel that I have lost a real friend as well as an excellent sergeant. I have never met anyone whom I trusted more than your brother. He was absolutely fearless and could always be depended upon to do anything.

“Perhaps you have heard that he was recommended for bravery at the battle of the Somme, when, after three attempts had been made, he collected eight men of his platoon and was going to make another attack, when, luckily, he was stopped as the chance was hopeless. I was present at the funeral and he has been laid in a British cemetery just behind the firing line so there will be no difficulty in locating the grave after the war."