Calum is 'Apprentice of the Year 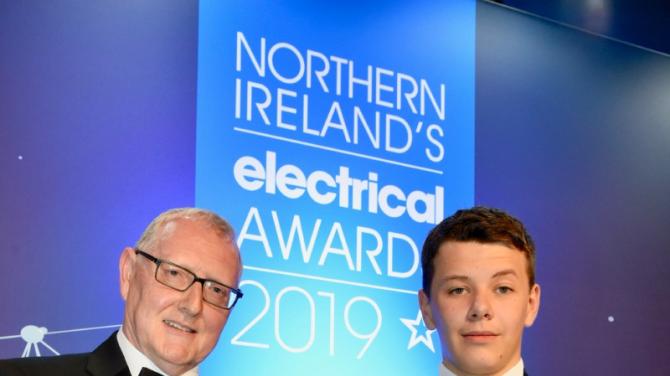 Calum McAuley, an apprentice with Braid Electrical Services, won ‘Apprentice of the Year’.

And Jordan Haggan, apprentice electrician with Alexander Bonar & Co, was highly commended in the same category.

They were nominated for the accolade alongside another three of their College colleagues.

Organised by the Electrical Magazine and judged by an independent panel of respected industry experts, the awards collectively recognise the achievements of both companies and individuals.

Sean McAleese, Training Manager at Northern Regional College, said they are thrilled that the hard work and talent of so many of their apprentices are being recognised at these awards.

“We have worked closely with local employers over many years to ensure we are equipping our students with industry-level skills, and these invaluable relationships help us to ensure our students receive training at the very highest level,” he said.

Apprentice of the Year Calum, who is currently enrolled on a Level 3 electrical installation programme, said he always wanted to be an electrician.

“I’ve always tried, both in College and on-site, to achieve the very highest standards, in everything I do,” said Calum.

“It’s great to have all that hard work and effort recognised with an award like this one.”

Jordan Haggan, (24), said from the outset of his career he spent a lot of time working alongside electricians.

“But it took me a while to make the leap of faith and pursue it as a career myself. I thought it was too late to start but the apprenticeship has opened new doors for me, and I really enjoy the work I do and am proud of the new skills I’ve developed,” he said.

“This award is really just the icing on the cake for me and it means a lot to be recognised for my hard work.”

The 2019 Electrical Awards took place recently at the Crowne Plaza Hotel, in Belfast.