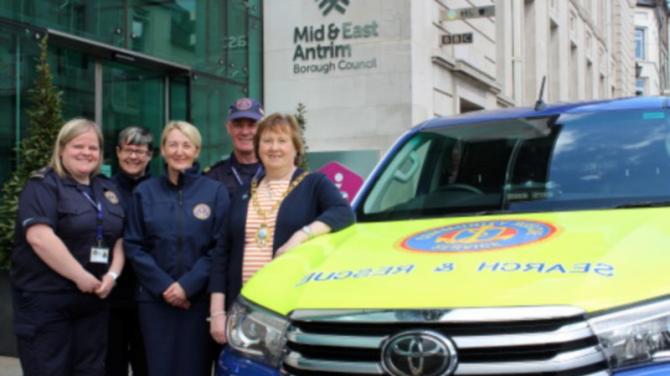 THE Mayor of Mid and East Antrim has chosen the Community Rescue Service (CRS) – Central District, as her official charity for this year.

Mayor Cllr Maureen Morrow said she is really pleased and proud to be supporting such an invaluable cause during her term.

“The CRS give up their spare time to provide a service to those in difficulty. Their work involves numerous emergency situations and they should be given recognition for their hard work and dedication in providing this service for people of our borough.”

CRS are the only accredited Lowland Rescue team in Northern Ireland who are capable of searching every environment. The Mayor continued: “The CRS team are fully committed to the cause providing a professional service to bring loved ones home.They have already responded to a large number of local incidences in the last few years and I would encourage local businesses and the people of Mid and East Antrim to support this charity by fundraising and donating to this very worthy cause.”

CRS Regional Fundraising Officer, Sharon Gibson said: “We’re delighted to have the support from the Mayor of Mid and East Antrim this year. Serious or life-threatening situations can happen to anyone at any time.