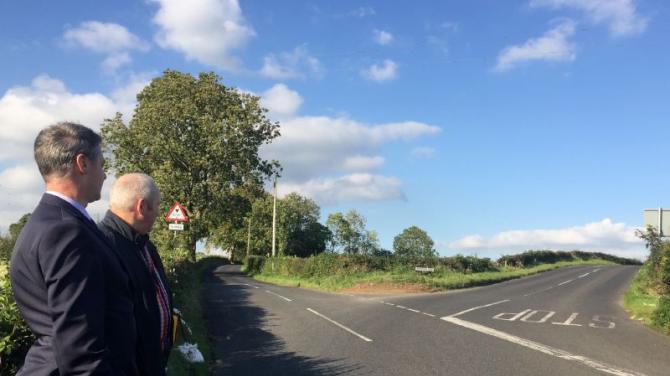 NEARLY half a million pounds is to be spent on re-aligning a notorious junction on the outskirts of Ballymena, according to a local MLA.

Assemblyman Paul Frew says the the Department of Infrastructure propose major works at the junction of Sand Road and Woodtown Road.

The DUP man, in welcoming the plans, revealed that the cost will be in the region of £460,000, adding that he hoped the work would begin ‘very soon’.

He told the Guardian: “This has been an ongoing campaign for me and my constituents who use this Junction sometimes on a daily basis .

“ I first contacted DFI Roads some years ago in September 2012 when they told me that due to recent collisions an investigation was under way.

“They also informed me at that time they had a scheme proposal under development with a number of options being considered.

“Writing back to them a year later in 2013 DFI Roads then stated they hoped to be in a position to compete for funding in the next three years works programme which was being developed at the time.

“By 2014 we then managed to convince DFI Roads to put in place a number of additional measures at the junction.

“New Junction warning signs and Slow markings were provided along with new enhanced signage on the Woodtown Rd.”

Mr. Frew said that DFI Roads are now proposing to spend £460,000 on upgrading the junction although he did not specify an actual timeline of when the work will take place.

He added: “ The primary aim is to change the junction priority from Woodtown Rd to Sand Rd to accommodate the predominant traffic movements.

“This will also improve stopping sight distances throughout the approaches. I would like to thank DFI Roads for this upgrade and hope it gets rolled out very soon.”