Rory banner is 'Tailor' made! 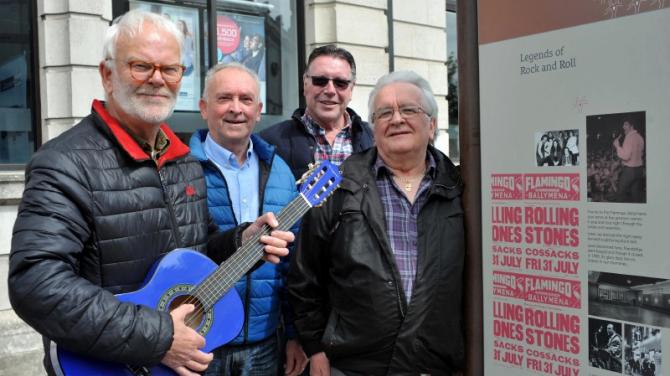 THIS week - June 14 to be precise - marks the passing, in 1995, of one of Ireland’s legendary musicians, guitar maestro Rory Gallagher.

And with that in mind we went on the hunt to find out why this rocker from Donegal is commemorated with a picture on one of the recently erected ‘local heritage boards’ in Ballymena town centre.

To help tell the story we enlisted the help of some of the local men who appear with Gallagher on the board.

At the time it was taken in the iconic Flamingo Ballroom, they were members of local rock’n’blues band, Tailor.

The band was formed in the early 70s by Tucker McIlwee and John Tennant.

“Other band members who played with Tailor over the years were Ronnie McAuley, Hubert Dunlop and Ricky Maybin, Henry McQuillan, Dave Moore Trevor Erwin andGerry McNeely. We were transported to and from the gigs by Brian Surgenor, ” says John.

“Our first gig was at a place called Betty Staffs in Belfast but we travelled throughout Ireland playing most of the towns on the circuit.

“Amazingly, we had never played in Ballymena until Sammy Barr of the Flamingo approached our manager to offer a booking.”

It transpired that Tailor were playing on the same bill as Rory Gallagher. As you would expect, the group were excited but, in their own words, ‘not overwhelmed.’

John remembers: “We met with Rory and his band during set up,. Rory was a very down to earth guy. We discussed what songs we were going to play as we were going to have a one hour set. The Flamingo was full to the brim, the crowd were electric and Tailor recieved a tremendous welcome.

“Following the gig we met with Rory for the photo call. The rest is history. Tailor continued to travel the length and breadth of Ireland entertaining the young and not so young ravers until the group members went their seperate ways after six years of traveling on the road.”

After years of inaction the group reformed to play two gigs for Cancer research, The Countryman Inn and the Telecom Club were filled to capacity for the night of nostalgia and entertainment. £3000 was raised for charity.

And John ponders: “Will the group do it again? Watch this space!”

Rory Gallagher (2 March 1948 – 14 June 1995) was an Irish blues and rock multi-instrumentalist,songwriter, and producer.

Born in Ballyshannon, County Donegal, and brought up in Cork, Gallagher recorded solo albums throughout the 1970s and 1980s, after forming the band Taste during the late 1960s. His albums have sold over 30 million copies worldwide.

Gallagher received a liver transplant in 1995, but died of complications later that year in London at the age of 47.

He began playing after school with Irish showbands, while still in his early teens. Having completed a musical apprenticeship and influenced by the increasing popularity of beat groups during the early 1960s, Gallagher formed "The Taste", which was later renamed simply, "Taste", a blues rock and R&B power trio, in 1966.

Performing extensively in the UK, the group played regularly at the Marquee Club, supporting both Cream at their Royal Albert Hall farewell concert, and the blues supergroup Blind Faith on a tour of North America.

After the break-up of Taste, Gallagher toured under his own name.

The 1970s were Gallagher's most prolific period. He produced ten albums in that decade, including two live albums, Live in Europe and Irish Tour '74. November 1971 saw the release of the album Deuce. In the same year he was voted Melody Maker's International Top Guitarist of the Year, ahead of Eric Clapton. Though he sold over thirty million albums worldwide, it was his marathon live performances that won him greatest acclaim. He is documented in Irish Tour '74, a film directed by Tony Palmer.

During the heightened periods of political unrest in Northern Ireland, as other artists were warned not to tour, Gallagher was resolute about touring Ireland at least once a year during his career, winning him the dedication of thousands of fans, and in the process, becoming a role model for other aspiring young Irish musicians.