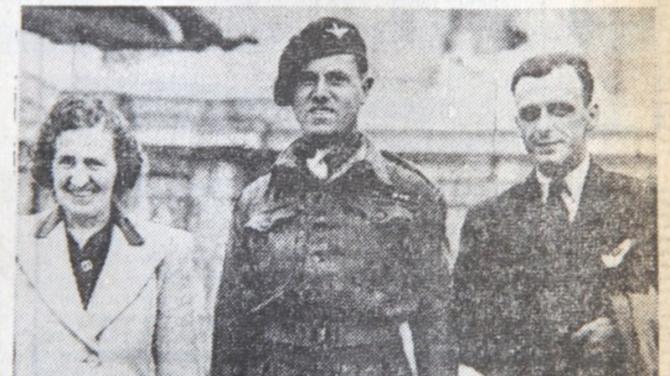 AS the 75th anniversary of the D-Day Landings is marked, it is fitting that the story of a Ballymena man who played a vital role in the battle is remembered.

The late Peter McCambridge won his Distinguished Conduct Medal on the 'Longest Day' - but he had, in fact, dropped into Normandy in the late evening of June 5, 1944.

Anyone who has seen the film of 'The Longest Day' will remember the scenes featuring Richard Todd and the Glider troops of the Oxs and Bucks Light Infantry attacking 'Pegasus Bridge'.

Mr. McCambridge, then an NCO with the 7th (Light Infantry) Parachute Btn. of the 6th Airborne Division, was fighting only yards from this famous action in the nearby village of Le Port.

In later years, Peter McCambridge was a familiar figure in Ballymena.

He lived at Wilson Crescent and was a keen walker.

Few, if any, would have known that the tall, bespectacled figure who went about his civilian life so quietly and modestly was one of the heroes of D-Day.

This is what his citation recorded about the action:-

‘This NCO was one of the parachute troops who landed behind the German lines in Normandy on the night 5th/6th June 1944.

During the fighting for Bénouville bridge on the 6th June, McCambridge's platoon was responsible for holding the village of Le Port. At one period his section became detached from the platoon and the fighting, which went on for 21 hours almost without pause, was particularly fierce.

McCambridge noticed that one house dominated the scene of the fighting.

By skilful use of a smoke grenade and displaying the greatest dash he got his section across a road swept by Machine Gun fire and into the house.

He used anti-tank grenades to smash open the garden gate and the door of the house. Once inside the house he was completely cut off from the rest of his company, who actually had withdrawn slightly, but he was in a dominating position and became the target for the enemy who greatly outnumbered his section and were surrounding him.

So well did he dispose his men however and so splendid was his leadership that he held this isolated house until the seaborne troops eventually entered the village from the other end, several hours later.

At times the enemy were close enough to try and beat down the door by beating it with their rifle butts - McCambridge dealt with such attacks by having grenades dropped on them from the upper windows. There is no doubt that the holding of this dominating house seriously weakened the enemy attacks and greatly assisted the battalion to carry out its job of holding the bridge.

On the 20th June at Bois de Bavent during a company attack Sgt McCambridge, together with another NCO, saved the life of his platoon commander, who had been wounded and whose phosphorus bomb was burning in his pouch.

Between them they extracted the burning bomb and dragged the officer to cover despite heavy and accurate mortar and Machine Gun fire.

McCambridge has shown himself throughout the three weeks continuous fighting to be a truly magnificent NCO. He is calm, cheerful and always reliable.