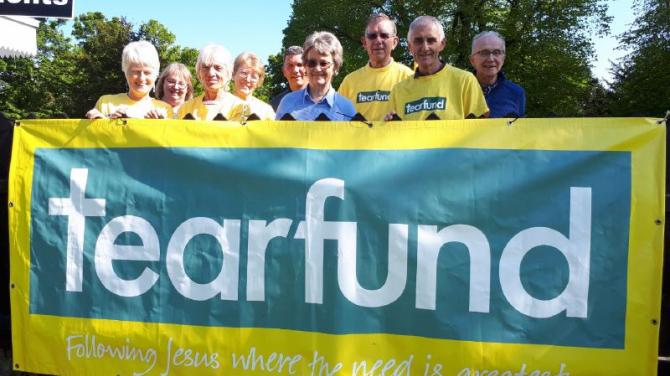 WHEN Gareth and Carol Williams, along with a friend, Andy Jordan, first decided to hold a walk in Glenariff Forest Park, they didn’t know that 30 years later, they would still be running the event or that they would come to raise over £450,000 for global aid and development charity Tearfund.

Carol said: “We had the idea to do a sponsored walk, mainly to involve schools and youth groups, to raise money for a Tearfund project specifically relating to children and to have the opportunity to share about Tearfund's work in local schools,” says Carol Williams.

She continued: “For the first 24 years it was a 5 mile walk in Glenarriff forest park, a bit more arduous than the present one! As school groups wanted to come earlier we extended the time from early afternoon with BBQ in the evening. Now we are there from 10am until dusk.”

The group moved to Shane’s Castle 6 years ago when an outbreak of tree disease closed Glenariff temporarily. Carolsaid: “the 5k walk there is much more accessible to all ages and we decided to stay.”

Among a number of local schools which have supported the walk over the years, Cullybackey College attends annually. Overall, core of approximately 200 people walk each year.

The group has raised overt £450,000 over the years. Carol explained: “For the most part the projects were specifically to help children and tied in with the number of schools taking part. Now we join with other groups in Northern Ireland in supporting the same project.”

The projects chosen by the group have led to some lasting international relationships. For example, in their second year, the group supported Asha, one of Tearfund’s partners in Delhi, India. “We sent money to provide vaccinations to slum children during a cholera epidemic. We also supported Asha on two other occasions. This link resulted in Dr Kiran Martin from Asha speaking in Ballymena while visiting Tearfund Northern Ireland.

“As a result a team of builders from Wellington Presbyterian Church went to help rebuild a clinic in the slums in 2002. Our link with Asha continues still today.”

Jane Robertson, Tearfund’s Community Fundraising Manager in Northern Ireland, said: “We are so grateful to everyone who has participated in these walks over the years. 30 years is such an accomplishment, and the money the group has raised has made - and will continue to make - a tremendous difference in the lives of so many around the world.”

On why the group chooses to support Tearfund, Carol is clear: “Tearfund has been a constant influence in our lives for over 40 years. Along with other members of our prayer group the natural outworking of praying has been to challenge ourselves and others and to make a difference - to walk as Jesus would have walked.”

This is now being passed down to younger generations as Carol’s daughter, Ruth, first took part in the walk as baby in a sling - this year, her own son, Carol’s grandson, participated in the walk for the third year in a row.