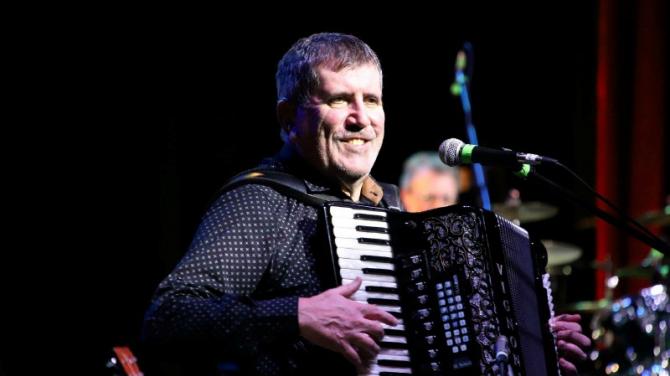 At the recent sell-out Irish Rovers Concert in the Braid Arts Centre one of the band members introduced was Morris Crum from Carnlough.

The Ballymena Guardian wanted to know how Morris came to be in the band.

Morris tells how his grandmother had a small hotel in Carnlough and every Saturday night a “Sing Song” was held in the bar. It was mainly Ballymena people attendance.

He remembers Johnny Mitchell, who worked in the Waveney Laundry, bringing his friends every week.

Johnny also brought musicians from Ballymena to play including Nellie King on piano and George Kernohan on accordion.

Morris said: “George, who had a barber shop in Harryville would leave his accordion during the week with his grandmother. He would let me try to play it, upside down as I remember my first attempts!

“During the summer months George’s brothers used to visit as well.

“They were great singers and often talked about how well other relations were doing who had emigrated and formed a group called the Irish Rovers in Canada. The first time I heard “Bonnie Kellswater” sung was by an older man called Jimmy Fullerton. Great days, great times and a great introduction to performing music.”

He continued: “Eugene O’Dornan from the Braid and I played as teenagers in our first band together. Eugene’s sister Maureen entered, or more properly bluffed me into entering a talent contest as I was very shy and horrified at the thought.

“Anyway the competition went well and from it I joined a Ballymena based band called “The Countrymen” managed by Harry Lynn and George Dillon.

Leo McCaffrey was the compere at the competition. Leo became a great friend and mentor and a major influence on my music career.”

In 1974 Morris went with Leo to play in the famous “Blarney Stone” in Vancouver. Members of the Irish Rovers would come into the Blarney Stone as they knew Leo well.

Morris said: “I became great friends with Wilcil McDowell, the Irish Rovers’ Accordion player. I was already a fan of Wilcil’s playing as he too occasionally visited my grandmother’s hotel in Carnlough.

“It was through Wilcil that I started to play keyboards on Irish Rovers recordings and take part as a guest musician on some of their videos.”

When Morris retired from his day job he was delighted to take up an offer in 2010 by George Millar, the bandleader, to join the Rovers.

He said: “When Wilcil decided last year to stop touring with the band I moved from keyboards to playing accordion. Touring Canada with the band also meant I was able to meet up with some other Ballymena musicians now living there.

“Paul Fynes who was in the Countrymen with me, and Kevin Erwin who played with Leo. Kevin was ill during my last visit and sadly passed away last year. One of the most talented people I have ever played with.”

Commenting on the concert which took place in Ballymena on March 21 Morris said: “It was lovely to perform in what I knew as Ballymena Town Hall.

“ It was a great concert and I was so pleased it was a such a success, especially for George and Ian Millar.

“Never easy playing in your home town with your relations sitting in the front row!

“It never ceases to amaze me that after 50 years the Irish Rovers continue to play to sell out shows throughout Canada and the USA. They are a fabulous band and brilliant people to work with.

“George and Ian are proud of being from Ballymena and the town is mentioned at every show.

“The Irish Rovers videos, which are broadcast on American television really show off the local area and the Antrim glens. I’m sure this has a real positive impact on Tourism here.

“The warm reception in the Mayor’s parlour just before the concert I think is a well deserved honour for the Millar family and it was an honour to attend it.”