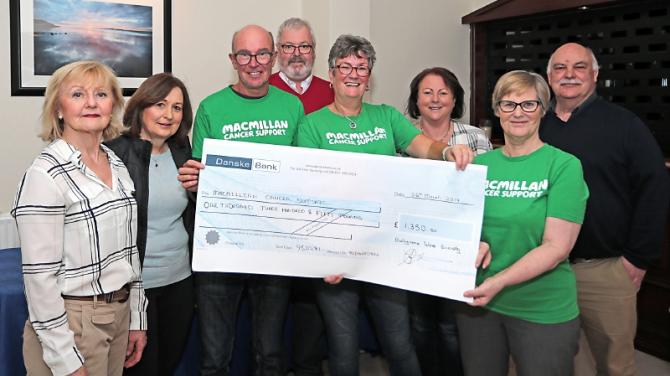 Two members of the Society, Sam and Fiona Stewart, were both affected by cancer and benefited from the Macmillan Move More programme.

Fiona was diagnosed with aggressive breast cancer in March 2017.She underwent two lots of surgery, six cycles of chemotherapy and a month of radiotherapy.

Her consultant told her that if she could exercise regularly this would reduce the risk of her breast cancer returning.

At this point she was feeling very negative about things. She had very little energy and thought she looked awful. She had no idea how she could ever start exercising.

She and Sam went to a breast cancer information day which turned out to be a lightbulb moment for her.

Alan McCausland from the Mac Millan Move More programme spoke about how good exercise was and about the programme he ran at Antrim Forum.

Fiona and Sam met up with Alan. Following this Fiona started at the Move More circuits class for cancer patients and both Sam and Fiona started attending Antrim Forum gym on a regular basis.

Unfortunately in April 2018 Sam was diagnosed with prostate cancer and was told he would have to go to Cambridge for robotic surgery.

Alan was able to give Sam exercises to do so that he was in the best shape for this major operation. Afterwards Sam was able to get back to the gym and made a good recovery.

The MacMillan Move More programme has helped many people get fit after a cancer diagnosis.

It also provides friendship and support to the participants.

Certainly it was a total game changer for Fiona.

There will be a Move More programme starting in Ballymena in the near future.