Garda and PSNI Bands 'raise the roof' at Braid 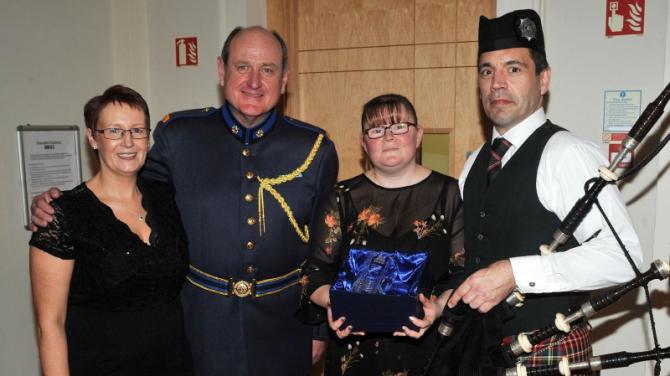 THE roof was very nearly raised at Ballymena's Braid Arts Centre last week as local people showed their enthusiastic appreciation for a stunning combined performance by the Band of An Garda Síochána and the pipers of the PSNI.

In what can only be described as an historic moment in Ballymena, the audience roared out their approval for a fantastic musical extravaganza which, to use a well worn cliche, definitely hit all the right notes!

The ground-breaking good relations concert was staged as a result of a project undertaken by the BRAID (Building Relationships and Interactive Dialogue) project, which began in October 2018.

The scheme has provided an opportunity for The Carson Project, Dunclug Youth Forum and Doury Road Development Group to explore the potential of working together to help embed good relations and peace building at a local level and to build upon work done to date.

One member of the audience, better qualified than most in terms of judging audience response at The Braid is Council Arts Officer Rosalind Lowry and she admitted she was 'blown away' by the performance and the audience reaction.

"What a fantastic atmosphere," she said. "The BRAID project organisers deserve huge congratulations for the concert - it was fabulous."

And the appreciation was not a one-way street with Garda band leader Pat Kenny saying: "I'm delighted everyone enjoyed the concert.The warmth that came from the audience was something I will cherish for a very long time. Please give my regards to all and God willing we will all meet again."

Sandy Wilson of North Antrim Community Network echoed the thoughts of many who attended when he made special mention of Ballymena's Colum Best, a major driving force behind the evening.

He said: "Congratulations - mainly to you (Colum) for your vision about hosting the concert and to the other community people involved.

"It was a truly enjoyable and memorable evening for everyone and i think two standing ovations at the end said it all. We really enjoyed the singers as well , they really added to the talent and variety of the musical performance. Well done to all ! "

Colum admitted he was almost overwhelmed by the response. He told the Guardian: "It was out of this world and people leaving at end of night were saying that it was the best concert they had ever been at.

“I have never seen an audience cheer as loud or stand up to applaud so much .. the place was really rocking. I am lost for words and do not know how to thank everyone involved enough."

The project was funded by The Executive Office, as part of the 2018/19 Central Good Relations Funding – Good Relations Capacity Building Pilot and contributes towards the delivery of one of the Together: Building a United Community (T:BUC) Strategy key priorities.