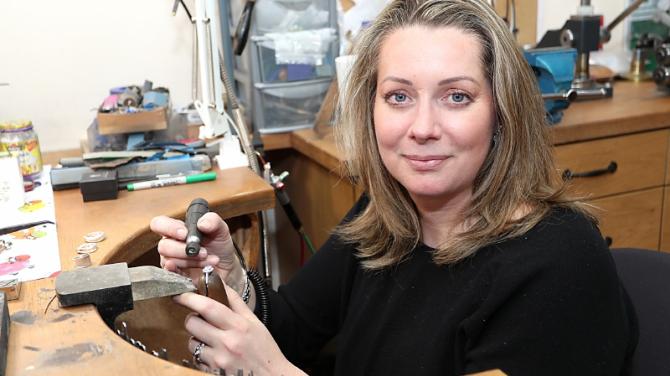 A local jewellery designer is attracting world-wide attention after creating special gifts for The Duke and Duchess of Cambridge.

Vera McCullough was commissioned by Mid and East Antrim Borough Council to create two pieces of jewellery for the Royal couple.

Prince William and Catherine were presented with the gifts, which featured their birthstones, during a recent visit to Ballymena.

Vera, who has a studio located at the foot of Slemish Mountain created silver floral cufflinks for Prince William and a brooch, which can also be worn as a pendant, for Catherine.

She said: “The council contacted me to ask if I would be happy to make some gifts and when I found out who it was for my jaw dropped.

“It's not often you get an opportunity like that and it was such an honour for me to make something special for the Royal couple.”

Vera said the response to her jewellery has been “amazing” and she has received calls from all over the world.

She explained: “Once it became known that I made the gifts I got calls from America, Australia, Canada and Africa. The phone hasn't stopped. I have also had wonderful support locally with everyone congratulating me.”

Vera, who is inspired by her love of nature, has been designing, making and restoring jewellery for over 24 years.

Born in the Czech Republic Vera, moved to London where she worked for four years at Hatton Garden Jewellers.

Vera met her husband in London and after a couple of years the couple decided to move to Northern Ireland.

Vera set up her own studio and has been hard at work designing and creating bespoke jewellery. At the beginning of February she won Northern Ireland Jeweller of the Year.

Vera said: “Moving from London to Buckna was a big change but I love it.

“Every piece of jewellery I make for customers is special to me but this was a little bit extra special.

“I was so honoured to be chosen by the council and I would like to thank them for entrusting me to make a gift for the Royal couple during their visit to Ballymena.

“I was told that the couple actually delayed their departure for a few minutes to receive the gifts and they were delighted with them.”