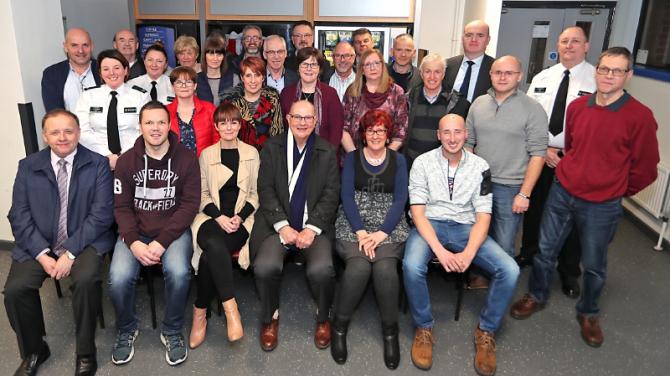 A gathering of Christian outreach groups was hosted by the Mid and East Antrim police at Ballymena’s PSNI station on Tuesday, March 5 to discuss the possibilities for improved collaboration and communication, and to launch a new signposting initiative.

The event focused on the possibilities for greater collaboration between the churches, ministries, and the PSNI to improve cohesion, communication, and to explore ways in which we can work together to bring help and support of various kinds to those needing it in our community.

The event was facilitated by Without Walls in conjunction with Chief Inspector Stephen Humphries (PSNI Engagement Lead) who hosted the event.

Assistant Chief Constable Mark Hamilton attended the evening and spoke in support of the Signposting project and to encourage churches and outreach groups to partner more with the police to help make communities safer places. Recently retired Chief Superintendent Stephen Cargin also commended this initiative and gave several examples of where such collaboration is working successfully.

Jonathan Leakey and Philip McCartney of the Without Walls team introduced the new signposting booklet and web resource that a number of organisations including agencies, charities and church ministries have contributed to, aimed at helping people in whatever kind of need to access the help and support from agencies and ministries in the town.