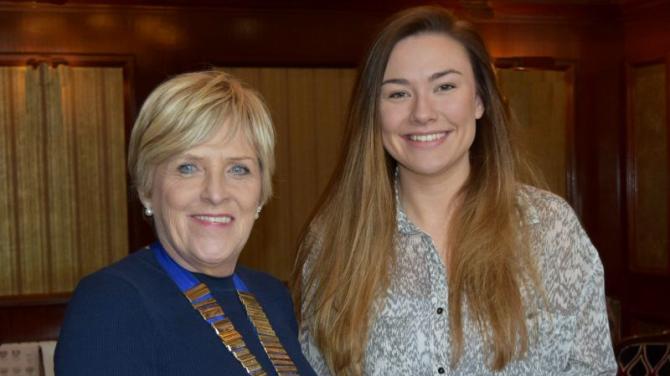 BALLYMENA Lions Club have presented a cheque to the charity “No More Traffick” - a charity which aims to raise awareness of human trafficking and modern slavery.

Human trafficking and modern slavery are a scourge which has reached most parts of Northern Ireland.

Referrals to National Referral Mechanism and criminal cases by PSNI, have increased, compared with the previous year, to about one per week.

There are slightly more women than men involved and in addition a small number of children.

While a substantial number of the women are sexually exploited, most of the people trafficked are forced to work with little or no recompense and often live in squalid conditions.

Many members of the general public became aware of this situation due to the BBC drama “Doing Money”, mainly located in Belfast and based on the true story of a woman who had been trafficked.

Initial response is to help those involved, but the majority are invisible in the community and help can only be provided once their plight has been identified and action taken.

The organisation “No More Traffik” was established in 2011 to increase awareness of the problem and concentrates on providing information to groups of people large or small.

Local representative Melissa Campbell stated: “Thanks to our volunteers, supporters and organisations like Ballymena Lions Club who provide financial support, we are continuing to make good progress within the Northern Ireland community.

“We encourage anyone who suspects exploitation to contact the PSNI immediately”.

A few of the signs of exploitation may be:-

A property that is very busy at night;

A house with blacked out windows and curtains always drawn;

A child travelling alone or with unrelated adults;

Someone who seems to be controlled by someone else.