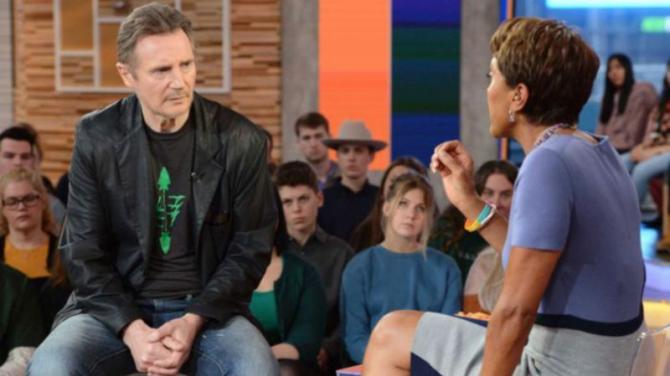 A RED Carpet event showcasing the release of Ballymena man Liam Neeson’s new film was recently cancelled, following controversy over comments he made about wanting to ‘kill a black man’ 40 years ago.

His comments hit the press just after the Ballymena Guardian went to print last week and a media controversy reached hurricane proportions - especially in the United States.

While the vast majority of local people sided with the Demesne man during seemingly interminable social media ‘wars’, the Hollywood heavyweight was forced to defend himself on ABC’s Good Morning America last week as he told host Robin Roberts: “I’m not a racist.”

Neeson hit the headlines for all the wrong reasons after he gave an interview to journalist, Clemence Michallon, during promotion of his new movie, Cold Pursuit, a revenge thriller.

In a recorded interview with the journalist, he detailed an alleged rape of a friend.

He said: “She handled the situation of the rape in the most extraordinary way.

"But my immediate reaction was. - I asked, did she know who it was? No.

“What colour were they? She said it was a black person.

“I went up and down areas with a cosh, hoping I'd be approached by somebody - I'm ashamed to say that - and I did it for maybe a week, hoping some 'black b**tard' would come out of a pub and have a go at me about something, you know? So that I could kill him."

Liam defended himself on an American TV show stating that his intention had been to get people to talk and open up about the issue of racism.

He said: “We all pretend we're all politically correct in this country. - in mine, too.

“You sometimes just scratch the surface and you discover this racism and bigotry and it's there.”

He said learning of his friend's rape about 40 years ago - she has since died - gave him a "primal urge to lash out".

The actor said he “went out deliberately into black areas in the city looking to be set upon so that I could unleash physical violence.”

He added: “It was horrible, horrrible when I think back, that I did that.

“It’s awful, but I did learn a lesson from it.”

He said he would have acted the same had his friend's assailant been white and said: “If she’d said an Irish or a Scot or a Brit or a Lithuanian, I know it would have had the same effect.”

Neeson also touched on his time growing up during the Troubles and said he knew friends who died on hunger strike.

He told The Guardian in 2014 that he had experienced a form of racial profiling himself, when as an Irishman he was regularly pulled aside on flights to Britain in the 1970s.

Kehinde Andrews, a professor of black studies at Birmingham City University, told the BBC Neeson's comments were "completely inappropriate and offensive" and to make them as he promoted a film was "distasteful".

Good Morning Britain presenter Piers Morgan lashed out at Neeson saying his words were the “purest personification of racism”.

But Morgan’s words were dismissed as ‘stirring’ by locals who lined up on social media to paint a portrait of the Liam Neeson that they knew.

On the other hand, former England footballer and anti-racism campaigner, John Barnes, defended Neeson during an emotional interview on BBC Radio 5 Live.

He commented: “He was ashamed a week into it. He understood that he was wrong for thinking what he did. And we have to have this conversation.”

On American talk show The View, she said: “People walk around sometimes with rage. That’s what happens. Is he a bigot? No.

“I’ve known him a pretty long time, I think I would have recognised. I’ve been around a lot of real bigots.

“You can’t be surprised that somebody whose loved one is attacked is angry and wants to go out and attack.

Michelle Rodriguez, who co-starred with Neeson in Widows last year, also leapt to the actor’s defence, telling Vanity Fair: “I don’t care how good of an actor you are. It’s all bull**it.

“Ignore it. He’s not a racist. He’s a loving man. It’s all lies,” she told Vanity Fair.

Note: A spokesperson for Mid and East Antrim Council said they had received no approaches from anyone seeking to have the star’s ‘Borough Freedom’ removed.