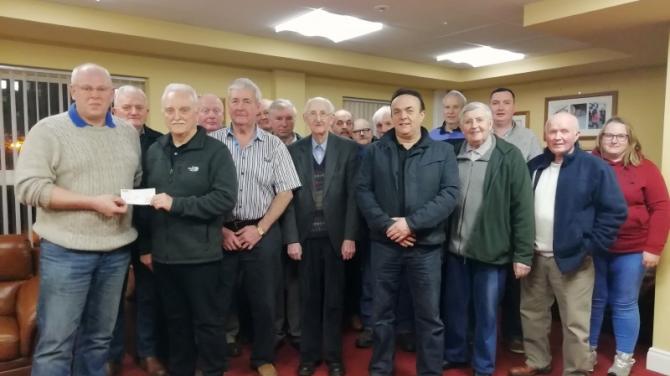 This was an ideal opportunity for potential volunteers at NIAS Northern HQ, Ballee to find out more information and they showed a lot of interest in joining the scheme.

The First Responders received its first donation on February 6. Braid Valley Vintage Enthusiasts presented the Scheme with a cheque for £2,800 for the purchase of two defibrillators and response packs.

John Crothers presented the cheque to Stephen Lamont and Alan Murray, two of the team working to get the scheme operational by early summer. Alan Murray thanked them for their generosity and emphasised the importance of the new venture.

“Last year in Northern Ireland there were almost 1500 out of hospital cardiac arrests: an average of four a day. Only one in ten of these people survived to be discharged from hospital. However, with CPR and defibrillation within 3 to 5 minutes of collapse, survival rates can rise to 49% and above.

Braid Valley Community First Responders aims to train and organise local people to respond to cardiac arrests in their own community while the ambulance is on its way and improve survival rates in Broughshane and Ballymena and the surrounding rural areas. This generous donation will be of great help to us in achieving our aim.”

Stephen Lamont issued an appeal for local residents to ensure that their addresses were identifiable.

“Clear signage is vital if we are to get to you quickly in a life threatening emergency.

“Our plea is that you identify your house number or name clearly so that it can be read from the road.

“ If you live up a shared drive, please talk to your neighbours and label the end of the drive with all the house numbers and ensure that each individual house is numbered.

“This will help us to help you if you are having an emergency.”