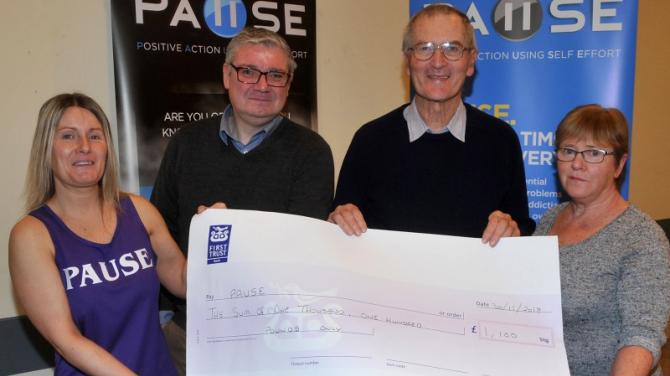 Heather McKelvey has donated £1100 to PAUSE after running the Belfast Half Marathon.

Heather’s father-in-law, Adrian McKelvey, who passed away suddenly last year, was a founding member of PAUSE, a support group for people in the Ballymena area suffering from addiction-related problems.

He also served as secretary of the group.

Mr McKelvey was described as a private and modest man who shunned the limelight.

He was keen to reach out and help those who were struggling with addiction issues after he had in his past battled alcohol addiction.

He even had been honoured by the Queen as he and his wife, Ann attended a Buckingham Palace garden party when the group was awarded the Queen's Award for Voluntary Service.

Heather ran the Belfast Half Marathon in memory of her late father in law, and raised this excellent amount of money for a worthy cause, that was very close to his heart.