Lewis announced as a finalist in SuperValu search for Young Superstar 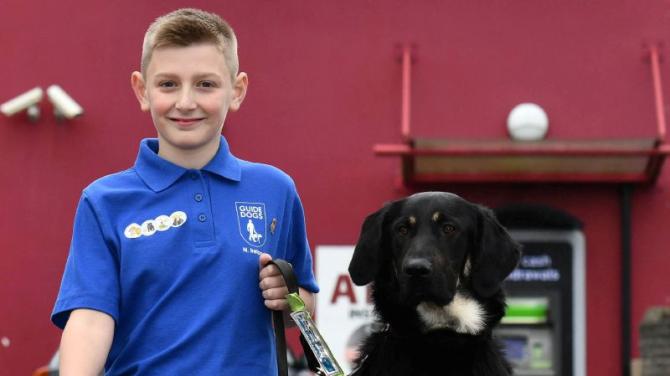 BALLYMENA boy, Lewis Johnston, has secured a place in the final of SuperValu’s SuperStars awards.

The 10 year old raised £1,500 for Guide Dogs NI at the beginning of September.

Lewis is set to attend a prestigious awards ceremony at Titanic Hotel, Belfast on November 21, where the winners will be announced.

The Guardian first covered Lewis’ story back in August when he vowed to walk from Ballymena to Carnlough to raise money for Guide Dogs NI.

He completed his challenge on September 2, and was joined by his dad Shane, as well as his grandad and other family members.

Lewis was inspired to undertake the challenge after spotting a woman walking with her guide dog.

Lewis was intrigued at how the guide dog was carefully leading the lady safely through all the obstacles a town centre presents for those who are visually impaired.

He then decided he wanted to fundraise to help “give people a better life.”

Lewis' mum Laura said: "We are totally overwhelmed and super proud that Lewis has been shortlisted for this award.

"My sister, who is Lewis' godmother, nominated him for the award and we are delighted that he was chosen as a finalist.

"It is such a huge achievement and honour for him to be considered and even if he doesn't win he's still a superstar in our eyes!

"His principal at Dunclug PS, Mr Beacom, is also very proud as it's a great achievement for the school as well.

"It really is amazing and we are so thankful for all the support Lewis has received.

"It is gobsmacking that from just one wee small idea it's developed into this!"

Lewis has developed a real interest in the work of Guide Dogs NI and he even spent his half term break volunteering at the Belfast Head Office with the guide dog trainers.

The SuperValu SuperStars is now in its second year and recognises those who have gone beyond the call of duty to help people and communities in need.

The campaign launched in June and received hundreds of inspiring nominations.

The glittering finalists’ ceremony will be hosted by TV personality Pamela Ballantine and the overall winner will walk away with £1,000 for themselves and a £1,000 donation to a registered charity of their choice.

All other finalists will receive SuperValu vouchers.

Stephen Bogle, SuperValu Brand Manager, said: “The SuperValu SuperStars campaign uncovers and recognises remarkable individuals from all parts of the community who have gone beyond the call of duty.

“As well as rewarding kids and adults who have done something remarkable, the introduction of additional categories this year means we will be able to reward the work done by people in the social enterprise sector, in community groups and even among SuperValu colleagues who work tirelessly all year to raise funds for Action Cancer.

“There were so many fantastic and unique entries this year and the judging process is never an easy task, but we have an extremely strong group of finalists and the winner will be a very deserving one.”

Judge and host of SuperValu SuperStars, Pamela Ballantine, said: “I'm thrilled to be part of this amazing initiative which rewards those who are doing good things in communities right across Northern Ireland.

“There is a lot of incredible work being done by individuals, both kids and adults, that goes completely unrewarded and this campaign offers the chance for some of this work to be recognised.

“ I can’t wait to meet all of our finalists on November 21 in the Titanic Hotel.”