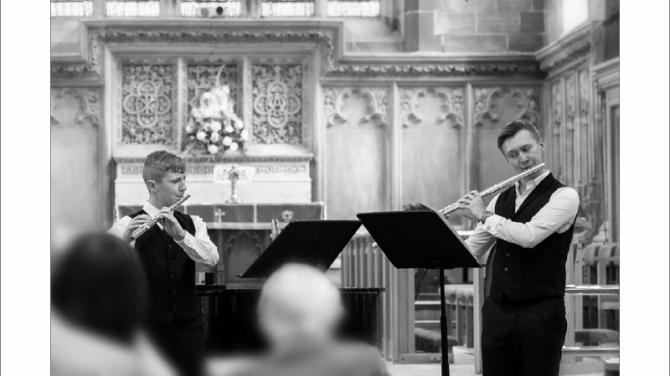 Flautists and brothers Ross (18) and Jake (16) Houston from Kells are sharing the stage this week in a final musical salute to RAF100.

The pair are performing as part of the RAF in Concert tour which arrives at Waterfront in Belfast today (Tuesday).

The tour marks the end of a series of exciting events that have been staged around the UK this year serving to commemorate and celebrate the Royal Air Force as well as inspiring the next generation of Servicemen and women.

The boys – who have been playing the flute since the age of six – are joining accomplished musicians from the RAF Squadronaires, Central Band of the Royal Air Force and Salon Orchestra to deliver a rousing finale to the first 100 years of the RAF.

They said: “We’re really looking forward to performing alongside the RAF’s accomplished musicians at such a wonderful venue.

“It will be an honour to help contribute a distinctly Irish flavour to the evening’s programme in recognition of the men and women from Northern Ireland who have served, and continue to serve, in the Royal Air Force as we mark its centenary year.”

Concert-goers can also look forward to rousing military marches, toe-tapping big band numbers and timeless military tunes including The Dambusters March and Spitfire Fugue as well as the big band sound of Glenn Miller’s In the Mood and Keep ‘em Flying.

The concert will be conducted by the RAF’s Principal Director of Music Wg Cdr Piers Morrell and the compere will be Northern Irish television presenter and journalist, Paul Clark.

For ticket details visit the Waterfront box office at www.waterfront.co.uk or call 028 9033 4455.