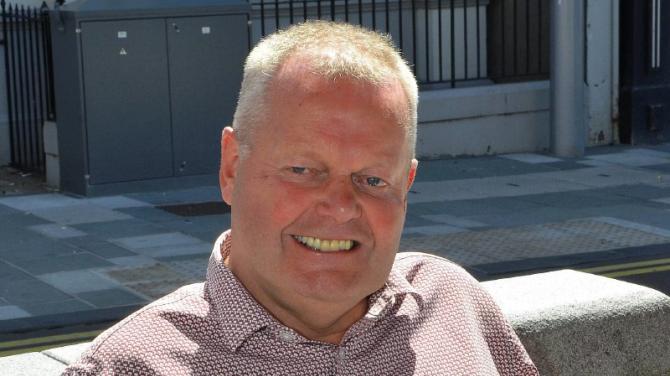 BALLYMENA is basking in one of the warmest summers in recent years and people are certainly making the most of it.

Despite the three week hosepipe ban in early July (which has now been lifted), scorched grass and balmy nights the warm weather is a welcome change from the washed out summers most are used too.

Whilst 1976 was the hottest summer in the UK on record, over Scotland and Northern Ireland, 1995 was every bit as hot as, and sunnier.

Stephen Reynolds from the Front Page Bar in Ballymena said as a boy he remembers the “summers being better but the winters being much colder”.

Stephen said: “It has been a long time since we had a summer like this. As a young man growing up I remember the summers were a lot better but the winters were so much colder and I remember as a boy the dead water below the Carry freezing over.”

Stephen said he and 25 customers from the Front Page Bar recently took advantage of the good weather with a trip to Rathlin.

He commented: “It was may first trip to Rathlin and it was incredible. Looking out at the sea you would have thought you were in the Med.

“I was so impressed with the number of tourists that were there too, people from Germany, America, France, it was great to see.

“We have so much on our doorstep and the good weather is a great time to get out and about and experience what the area has to offer.”

Paul O'Neill from Ballymena said the last time he remembered such a long dry summer was 1995.

He added: “I have just come back from a holiday in Bucharest and it is warmer here.

“I remember in 1995 we were in Spain and when we came back the weather was as good as it was there and it went on into September. We haven't had a summer like this in a long time and it is great to see.”

Wilma Power from Ballymena said: “I don't know exactly when it was but I remember a very warm summer when the grass was scorched and there was a bit of a Spanish feel to the place. This summer has so far been the driest and warmest for a number of years.”

David Gregg and Paul Kyle from Ballymena also remember 1995 being a “good summer”.

David added: “The summer in 1995 lasted a long time but I don't know if it lasted as long as this. When the weather is good you can get out more and its a lot better than all the rain we are used to getting.”