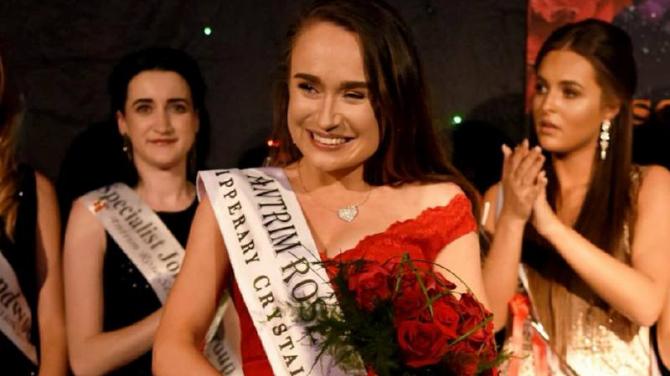 A PORTGLENONE woman is making her way to the dome as the Antrim Rose for the 59th Rose of Tralee Festival.

Roisin McCloskey came out triumphant at the heat held in the Le Mon Hotel in at the end of May.

In competition with nine others she was announced as the Antrim Rose which there hasn't been since 2010.

Speaking to the Ballymena Guardian, she said she is "delighted" to be going to Tralee and is looking forward to meeting all the other roses.

"I am so excited about the experience. I think I am looking forward most to meeting everyone and making new friends."

The 23-year-old has been running her own drama and music business called 'Dramability' since she graduated in 2017 from Queen's University.

The music graduate can play the tin whistle, the flute and the harp and has also excelled in the Irish dancing world.

As a pupil of the Logan McCloskey School of Irish Dancing, Roisin is no stranger to the stage having graced many over Ireland over the years showcasing reels, jigs and hornpipes.

She now has Tralee in her sights and the coveted title of this year's Rose of Tralee.

"It is an amazing experience to be part of," Roisin explained.

"I have to get approximately 15 dresses organised for the Festival and a few businesses and dress makers have very kindly sponsored me.

"Before the Festival we are going to the Glaway Races and Kildare to meet all of the other roses.

"There are currently 57 roses and that will be whittled down to 32 who will appear on RTE for television interviews."

If Roisin is one of the lucky 32 she said the television interview with Daithi will not make her nervous.

"My business is all about teaching children how to be confident and outgoing in public so I think I will be ok in the interview if I am lucky enough to get that far."

Roisin will play a selected piece of music on her custom made tin whistle which was presented to her by Killarney Whistle.

She will also be presented with exquisite jewellery from Tipperary Crystal to match her gowns for the festival.

Roisin's mum, dad, two brothers and three sisters plan to travel to Tralee to cheer her on along with the extended family.

Roisin concluded: "I would love to win the festival but most of all I am going to enjoy it and make the most of a once in a lifetime experience."