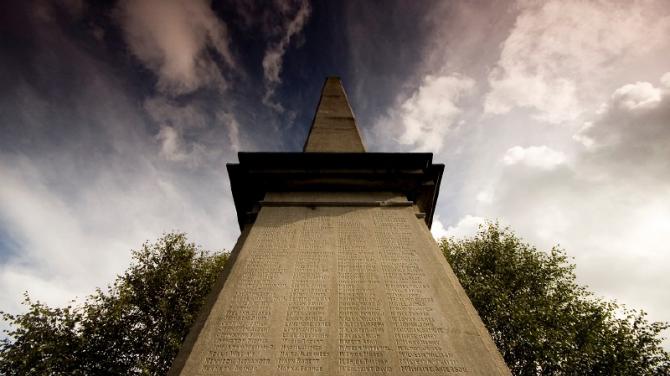 TWO years after Ballymena and district’s bloodiest day at the Battle of the Somme, the casualty list continued to grow.

In the wake of the massive German offensive which had pushed the Allies back in March and April, news was beginning to emerge of more and more wounded and prisoners from those dreadful days when it seemed for a time that the war could be lost.

Mrs. Mitchell, Springwell Street, Ballymena, has received official intimation that her nephew, Rifleman H. Marshall, Royal Irish Rifles, is a POW. Rifleman Marshall served three years with the colours and was previously reported missing. Prior to joining up he was employed in the Braidwater Mill, Ballymena.

Mr. Andrew Mills, Craigdoo, Broughshane, has received a postcard from his son, Rifleman G. Mills, stating that he is a POW.

TAYLOR, Robert Gordon, 532376, Private, 46th Canadian Infantry, died of wounds on the 10th July 1918. He was originally of Queen Street, Harryville and is buried in Aubigny Communal Cemetery, France.

Ballymena Observer, July 19, 1918 - Mr. James Taylor, Queen Street, Ballymena, has received official intimation that his youngest son, Private Robert Gordon Taylor, Canadians, died at a Casualty Station on July 10th from wounds in the chest and abdomen received in action the previous day. Private Taylor emigrated to America six years ago and joined the Canadians two years ago. He spent a few days at his old home in Harryville before going to the front 12 months ago. He is the younger brother of Sheriff John Taylor of Mamon, Linn County, USA.

CATHCART, Robert, K/6681, Stoker First Class, HMS Anchusa, Royal Navy, died on July 16, 1918. he is named on the Plymouth Naval Memorial. Aged 24, he was the son of David and Agnes, Tullygarley and he is commemorated in 1st Ballymena Presbyterian Church.

CURRIE, W. H., 2nd Lieutenant, 55th Squadron, RAF, was killed in action on the 16th July 1918. His wife at Drumrankin, Cullybackey. He is buried at Charmes Military Cemetery, Vosges, France.

Mrs. W. H. Currie, Drumrankin, Cullybackey, has been notified that her husband, 2nd Lieutenant W. H. Currie, Royal Air Force, was killed in action in France on 16th July 1918 in a fight with German aeroplanes. Deceased was a son of the late Mr. William Currie of Clonard Gardens, Belfast and joined the army previous to the outbreak of war. Some time ago he was transferred to the RAF where gained rapid promotion. His younger brother is a POW in Germany.

He led his company with great courage and skill under heavy fire in an attack. His company was the first to reach the objective and owing to his good leadership was largely responsible for the success of the attack.

Mrs. A. Barr, Lower Tannybrake, Kells has received a letter from her son, Sergeant Major A. Barr, Canadian Machine Gun Corps, stating he has been awarded the Meritorious Service Medal for special attention to duty in the field. Sergeant Major Barr has been through almost all of the heavy fighting with the Canadians including Ypres, Vimy and Passchendaele. Prior to enlisting he was employed as a foreman planer with the Jewell Lumber Co., Hamburg, British Columbia.

The following have enlisted from town and district in the past fortnight:

Rifleman R. Dempsey, Royal Irish Rifles, is a POW in Germany. He is the son of Mr. Robert Dempsey of Castleton, Ahoghill.

Mr. Robert McIlroy of Parkhead has received a card stating his son, Rifleman Robert McIlroy, is a prisoner in Germany, Rifleman McIlroy was previously posted as missing on April 14. He was wounded in July 1916 when his brother Rifleman Harry McIlroy, Royal Irish Rifles, was killed.

Mrs. Agnes Cathcart, Tullygarley, Ballymena. has received information that her son, Seaman Robert Cathcart, is missing with HMS Asonza which was torpedoed. He served eight years with the Navy prior to which he was employed by the Midland Railway Company. He joined up at the age of sixteen and was home on leave a short time ago.

Mr. James Cathcart, Castle Street, Ballymena, has received intimation that his son, Corporal James Cathcart, Royal Irish Rifles, is wounded and a prisoner in Germany. Corporal Cathcart was previously reported missing and was wounded earlier in the war. Before joining up he was a wood turner in the Braidwater Mill, Ballymena. His brother Rifleman William Cathcart is also a POW.

Rifleman Joseph Milligan, Royal Irish Rifles, has written to his mother, who resides at Galgorm Parks, stating he is a prisoner in Germany. Rifleman Milligan, who was previously reported missing since March last was, prior to enlisting, in the employment of Mr. S. Ruddle, High Street, Ballymena.

Ballymena Observer, August 2, 1918 - Lance Corporal David Holmes, Royal Irish Rifles, son of Mrs. David Holmes of Hugomont, Ballymena, has been killed in action. He joined the Rifles in 1915 and has been serving in France for a couple of years. Prior to enlistment he was employed in Mr. James Ramsey's hairdressing establishment, Church Street, Ballymena. His brother, Private Arthur Holmes, Canadians, was killed in action in April 1917.

Mr. William McIlvenna, Mount Street, Ballymena, has received notification that his son, Private William McIlvenna, Canadians, was killed in action by shrapnel on August 6th. Before emigrating to the USA several years ago he was employed in the office of the late J.H.Bradley as a clerk. On the outbreak of war he journeyed to Toronto and joined the colours. His brother Stuart McIlvenna is serving as a sergeant with the US army in France.

GRAHAMSLAW, Alexander, 19940, Private , 7/8th King's Own Scottish Borderers, died on the 23rd July 1918. He was from Broughshane. He is buried in Vauxbuin Cemetery, France and commemorated in 2nd Broughshane Presbyterian Church and on the village war memorial.

TURTLE, John, 19572, Corporal, 62nd Machine Gun Corps (formerly 12161 Royal Irish Rifles) was killed in action on the 20th July 1918. Aged 22, he was born at Ballymena, lived Belfast, and is commemorated on the Soissons Memorial, France.

RAINEY, J., 290563, Private, 1/8th Scottish Rifles (Cameronians), died on the 29th July 1918. Aged 27, he was the son of John and Hannah Rainey of Aughnahoy, Portglenone. He is buried in Raperie British Cemetery, Villemontoire.

DEMPSEY, Isaac, 27520, Private, 9th Royal Inniskilling Fusiliers, died of wounds at No.62 Casualty Clearing Station, Arneke, France on the 29th July 1918. He was the son of William Dempsey, farmer, of Artiferal, Dunloy. His wife and son Isaac were at Dunboy, Dunloy and he is commemorated in Killymurris Presbyterian Church.

SINCLAIR, William B, 41416, Private, 2nd Royal Scots Fusiliers, was killed in action on the 30th July 1918. He was born at Ballymena and lived Bellshill, Glasgow. He is buried in Meteren Cemetery, Nord, France.

Sergeant Samuel Wilson, Royal Irish Fusiliers, son of Mr. Thomas Wilson, Bridge Street, Ballymena, is at present home on leave. He enlisted at the outbreak of war and is one of three brothers with the colours. He came through the Dardanelles and was in Serbia, Salonika, Palestine and Egypt. This is his first leave since proceeding on active service. prior to joining up he was in the employment of Messrs. Barclay and Crawford, Ballymena.

Private William Murphy, son of Mr. A. Murphy, 11 Park Street, is at present home on leave after being on active service for three years and six months in the Dardanelles, Salonika, Serbia, Macedonia, Palestine and France.