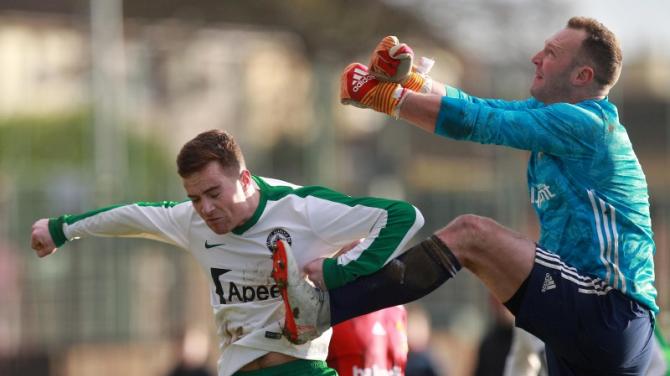 A Paul McNeill brace in the first half fired Homers to a crucial win over Champions Saints, inflicting on them their first league defeat and in doing so giving themselves a boost in the title race.

Homers looked like the more hungrier side from the first whistle as they got amongst Saints upsetting their rhythm and not allowing them to play.

This hunger gave Homers the platform to play and on 16 minutes they almost broke the deadlock.

Saints did not heed this warning as three minutes later they were behind.

Jason Stewart clipped a long ball forward which Saints failed to deal with and it found Paul McNeill who beat the offside trap before poking the ball past Macauley Cairns.

This goal rocked Saints but they started to get a foothold in the game as the half wore on and came close to drawing level when Brian Paul Donnelly headed into the arms of Alex McCosh.

And then Connell Lemon hit the side netting when well placed.

Deep in injury time of the first half Homers struck a crucial blow when they went 2-0 in front.

Ryan Stewart collected the ball 20 yards out, he feigned to shoot before slipping in McNeill who drilled the ball past Macauley Cairns to cap a brilliant first half for Homers.

The second half saw Saints try to take the game to Homers, but the Harryville men used every bit of their big game experience to suck the life out of the game limiting Saints to half chances.

Gary Baird was stand out for Homers as he run the midfield for majority of the game not allowing Saints any quality on the ball.

At the back captain David Gibson was excellent ensuring his side held out for a comfortable win on a day to forget for Saints.

This game has been a fiery game over the years, but Abbeyview proved no match for the Thistle juggernaut as the Ahoghill side made it eight wins from eight in the League.

Thistle dominated from the first whistle but it took them until 31 minutes to make their dominance pay.

Alan Norton clipped a free kick into the box and Jason Johnston rose above his marker to head home the opener.

On the stroke of half time Thistle doubled their lead when David Drummond slipped in Randal Reid who exchanged passes with Peter Kennoway before slotting home his first goal of the game.

The second half was one way traffic with Jack Millar making it 3-0 for Thistle soon after the restart after good pressure from Randal Reid.

It was soon 4-0 with Alan Moore providing the assist with a right wing cross for Randal Reid to get his second goal of the game.

Reid completed his hat trick soon after when he was on hand to fire home after an Alan Moore corner kick was headed down by Peter Kennoway.

Thistle were rampant and made it 6-0 through Jason Johnston who headed home his second goal of the game after a great Jack Millar delivery.

David Campbell completed the rout making it 7-0 when he was set up by debutant Matthew Lorimer to score to keep up Thistle’s relentless run of form.

This game was goals galore with Galgorm finally clinching all three points in an eight goal thriller after Southside had come from behind three times.

Galgorm opened brightly and scored after 18 minutes when Robbie McGaughey scored a header from close range.

Southside battled back and got an equaliser before halftime when Sam McDowell scored with a low drive to send the sides in level at the break.

Galgorm went back in front soon after the break when Lee McCaughern fired a spot kick past Kyle Rowe after Kevin Henderson was tripped in the box.

Southside came back, when a Jonny Carson's free kick hit the bar and fell to Ryan Agnew who headed home for 2-2.

This was now end to end before Stewart Kenny scored to put Galgorm back in front with a drive from a partially cleared corner.

Again the home time come back with the tricky Fraser Young firing past the helpless Philip Simpson.

The away team moved back in front for a fourth time when great work by Rico Wylie gave Kevin Henderson the simplest task of scoring from close range.

There was to be an eighth goal in the game but this time it did not see a Southside comeback as Rico Wylie scored with a superb volley to make it 5-3 to Galgorm and secure a huge three points.