Baptism of fire in Premiership for striker Kenny 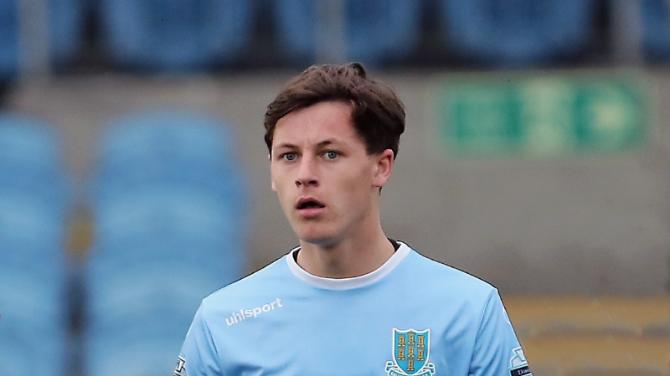 IT has been a tough baptism into the Premiership for young Ballymena United striker Kenneth Kane.

The 20-year-old has been a regular since breaking into the senior side - giving his all as the Sky Blues battle to get back to winning ways.

This time last year Kane was playing for Junior side Dervock United, where he was scoring goals for fun.

Not for the first time United manager David Jeffrey has taken a chance and given the rookie striker a contract with the Showgrounds club.

Another such chance signing involved a certain Cathair Friel - what a stroke of genius that proved to be.

Kane is still learning his trade at senior level.

He gives 100% commitment and effort each time he pulls on a United shirt.

The striker has a nice touch and at the weekend he set up Tony Kane for his goal against Warrenpoint Town in the 2-1 defeat by the bottom-of-the-table side.

Jeffrey sees a bright future for young Kane, but is well aware it will take time.

The United boss said he is not boasting about the striker but now he is on the radar he hopes things will fall into place.

“He is a young lad who has come from Junior Football. He was our only recognised out and out striker over the past few weeks,” Jeffrey outlined to Guardian Sport.

“And he has carried a big burden. Obviously with Adam Lecky coming in it has helped. He did not look like a junior footballer against Linfield in midweek. You have to be patient. We do not have the resources of other clubs. So we either produce our own or go on to identity the young men who are looking for an opportunity and give them the opportunity.”

The United boss continued - “And that is what we can say about all the players we have They come from other clubs where maybe they were not getting a chance. We give them a chance here and they have responded brilliantly. And the testimony of the players we have brought in - they have moved on so the challenge for us is getting players in and seeing if we can keep hold of them.”

“Kenny is another one of those. We do not have the resources of other clubs where they go out and spend a big amount of money on a forward player or whatever. The monies that we have made – in fact our budget is better simply because of what we have achieved in Europe. We have to spend it as best we can.”

And he spoke of how proud he is of young Kane. He recalled he had the lad watched by Paul McAreavey for a long time and Mickey O'Neill, who works along with McAreavey.

“Mickey in particular watched him for a period and then he came up and trained with us from Christmas last year to find his feet,” said Jeffrey.

“We never put any pressure on him in terms of joining us. He wanted to join us on his own accord. The club promised we would have him a chance. He has a great touch. And he works very, very hard and he is very, very committed. And he has been unfortunate not to have got a couple of goals.”

Back in October Kane scored twice in the 6-0 demolition of Dollingstown in the third round of the BetMcLean League Cup at the Showgrounds.

If Kane turns out anything like Friel it will be a big, big bonus for United.

Friel, currently out injured, joined Ballymena from Limavady United and found little trouble stepping up to the higher level.

With injury hit United struggling to get back on their feet it has been tough of young Kane.

But little has fizzed him since his arrival at Ballymena.

And he is certainly not afraid to put in a shift and works more than hard at training, always willing to learn.

The former Ballymoney High pupil has had a tough start in the top flight, but has every intention of coming through, with his team mates, and out the other side.

“He is a young man who keeps his feet on the ground and keeps progressing and keeps learning. The biggest compliment you could pay him is ‘he could be another Cathair Friel’,” concluded Jeffrey.