Captain Marvel Telford does the trick for Saints 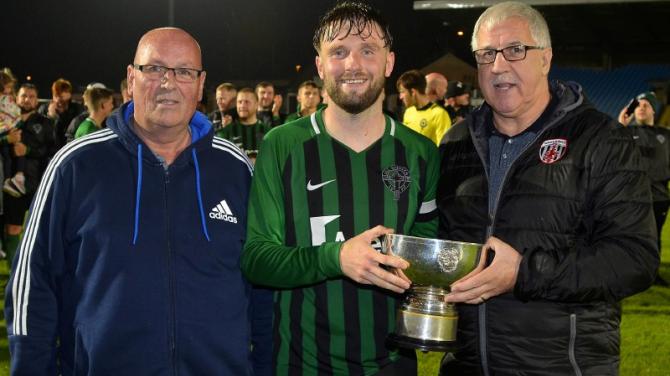 Saints Captain Alan Telford stole the show in this Final as he hit a hat trick to fire his side to Cup glory in a seven goal thriller.

Both sides took time to adjust to the Big Pitch at the Showgrounds as they felt each other out in the opening stages of the game.

Thistle started to get marginally on top with Matthew Boyd and Paul Aiken becoming dangerous. As the half wore on Saints started to settle as they started to knock the ball about and they had the best chance of the half when Brian Paul Donnelly got clear in the box but Sean Ward made a magnificent save to deny the Saints front man as the half finished in stalemate.

A goal was needed to spring the game into life and seven minutes into the second half it came for Thistle. Ryan Marks swung over a deep corner which David Calderwood headed back across goal, his header hit the post and fell to Matthew Boyd who had the easy task of smashing into the net from close range.

This goal was the spark the large crowd wanted as three minutes later Saints levelled when Alan Telford, from all of 30 yards, found the net with a brilliant dipping free kick which curled beyond Sean Ward to level the game.

Saints were then dealt a major blow when keeper Leon Bonnes was forced off with a calf injury, but luckily for Saints new signing Macauley Cairns was on the bench and the replacement was to have a large say in the game, when one of his first involvements saw his long kick headed clear by Thistle only as far as Alan Telford whose first time volley found the bottom corner of the net to give Saints a 2-1 lead on 65 minutes.

Macauley Cairns was soon again involved as he made a brilliant save to deny Matthew Boyd a swift equaliser.

Saints opened up a two-goal lead with 20 minutes to play when Barry Hamill’s corner found the unmarked Kavan Keenan and he made no mistake powering home a header from close range.

This goal looked to have put Saints well in the driving seats, but Thistle to their credit came storming back pinning Saints in their own half. Thistle set up a tense finish with four minutes of normal time to play when Gavin Kernohan curled a free kick over the Saints wall making it 3-2. Macauley Cairns looked to have denied Thistle extra time when he made a brilliant one handed save from Peter Kennoway who had broke free in the box, but in the third minute of injury time Thistle struck.

Corey Price sent over a corner kick which caused havoc in the Saints box and Matthew Boyd was on hand to send the game into extra time.

Extra time was a tense affair with Jason Johnston blazing over for Thistle when well placed, while at the other end Saints tried hard but struggled to get a breakthrough.

Right on the stroke of half time Saints Captain Alan Telford broke into the box and was pulled down with a penalty kick awarded. Alan Telford stepped up and fired the ball into the corner of the net sending Sean Ward the wrong way to give his side the lead once again.

Thistle pushed for another equaliser in the second period of extra time but Saints stood strong with a great defensive display seeing them through to the final whistle and winning the Cup.

After the final whistle Joe Burrell of 360° Properties presented the Top Four Cup to All Saints OB winning Captain Alan Telford and the celebrations began.

Substitutes – Aaron Keenan on for Brian Paul Donnelly, Macauley Cairns on for Leon Bonnes, Connell Lemon on for Philip Lynn, Emmet Killough on for Liam Cassley.

Substitutes – Jack Millar on for Ryan Marks, Gavin Kernohan on for David Campbell, David Tennant on for Paul Aiken.