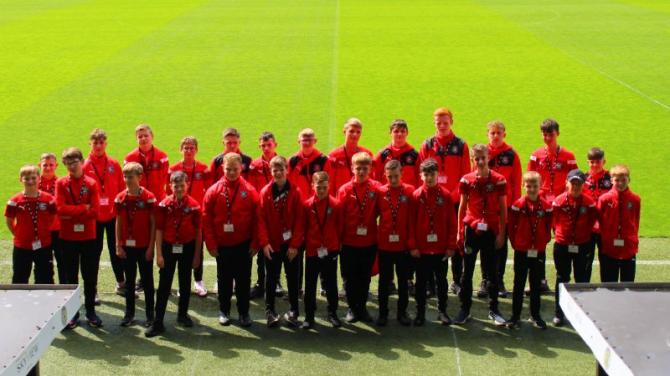 This year they partnered with Scottish Premier League side St. Mirren FC, as part of a package with their friends from InspireSport who once again gave the players the experience of a lifetime.

The players and coaches met early on day 1 (6:00am to be exact) at Larne Harbour to begin our weekend.

Even at that early hour the atmosphere was electric as 27 players from our U13, U14 & U17 teams got ready to live and train like the professionals for the weekend.

After a rough sailing, they arrived safely in Cairnryan and made the 2 hour journey to Paisley, Glasgow.

On arrival the players spent some time at the club stadium and shop, they even had the privilege of being introduced to first team manager and St. Mirren legend Jim Goodwin, alongside their new number 9, Jonathan Obika – who was certainly a favourite among the C4C boys.

Before long wet they were back inside and given an excellent stadium tour by the helpful staff of St. Mirren FC.

As an added bonus, another club legend (and current CEO) Tony Fitzpatrick introduced himself to the boys and gave them a motivational talk before their first training session.#

He went on to say that St. Mirren was ‘God’s Club’, and that the club is founded on many principles that we find in the Bible.

After an excellent technical training session with UEFA A licence coaches John Divers and Sam Maweuna, the boys were ready to play their friendly match against high quality local opposition.

The score lines didn’t quite go their way, but every player representative the club exceptionally well.

As you can imagine, the boys were ready for dinner and bed at the end of this long but exciting day.

Day 2 started with breakfast and a trip down Glasgow City centre where the kids had a chance to relax and do a bit of shopping.

Goalie Gloves, Football boots and Krispy Kreme donuts were among the items bought.

Despite the donuts, the boys had to prepare for their next training session, and they put in a solid shift for their 90 minutes tactical session.

One of the great things about St. Mirren is the family atmosphere that the club has, and C4C got behind the scenes access to the first team training session, alongside getting to watch the U11 & U15 teams play a competitive league match.

This showed all the players just how much work it takes to be a professional footballer, and even to see how good their youth teams were really gave their players the motivation to push on and improve their game.

Before the day was finished they headed into Glasgow for a fun night of bowling, mini-golf, and trampolinin

They really were spoilt for choice and the players loved every minute of it! To finish the evening they had a team meeting were the coaches Simon, William, Jess & Rodney share their individual stories to the players, and while they all had taken different pathways in life – their lives interconnect with one person – Jesus.

They finished off the tour with a trip to Ibrox stadium and shop, before heading across to Hampden Park for an excellent tour of the Scottish International Stadium. Perhaps the highlight of the tour was seeing the first team play a league match against Aberdeen, with St. Mirren running out 1-0 winners.

They were seated in the St. Mirren ‘fan zone’ and the players loved the ecstatic atmosphere.

Shortly after they made the trip back to the boat, and before long we were back home – every player and coach exhausted, but fully satisfied after an amazing trip. Special thanks to St. Mirren FC for their hospitality throughout the weekend, to InspireSport, Jed and Ian who looked after every single detail throughout the trip and to the bus driver John who won the bowling and became a bit of a favourite among the players and coaches.