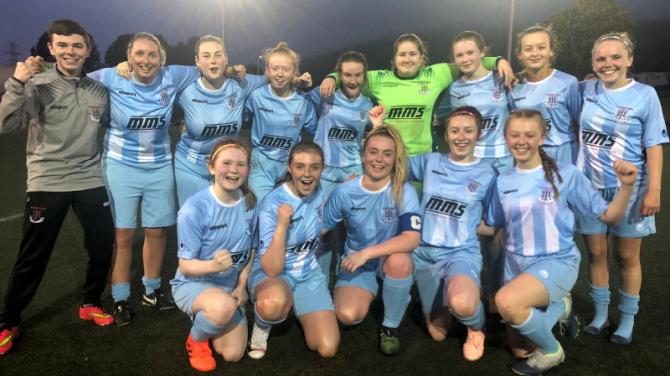 For the first time, Ballymena United Allstars LFC have had two senior teams competing in the NIWFA leagues in 2019.

With the Allstars first team contesting the Championship, Ballymena United Ladies were competing in Division 4 and have wrapped up automatic promotion with one game to go.

The Sky Blues will finish second behind run away league champions Lisburn Rangers – the only team to have beaten United in the league this season.

The squad has had to contend with a number of unfortunate injuries – including losing leading goal scorer Nikki McKendry to a broken collarbone at the end of June – but were able to get over the line at the first opportunity with a hard-fought draw away to St. James’s Swifts Seconds on Friday night (9 August).

In a very competitive match, the home side took the lead on 35 minutes and Ballymena pressed hard for the equaliser whilst remaining resolute at the back but couldn’t make it count in the final third.

That was until Nicky Stevenson headed the ball through to Zoe White whose touch moved through to the keeper, but she mistimed her collection and the ball rolled through into the back of the net.

It was a slice of good fortune but the Sky Blues worked hard, played well and deserved at least a point from the game. Not just any point, but the all-important promotion point!

Coach Jamie Mairs said: “This has been the first season of competitive senior women’s’ football for the majority this team, many of whom are just 14, 15 and 16 years old. They have given a fantastic account of themselves and it is an incredible achievement to have secured promotion immediately.

“The squad has risen to every challenge put in front of them and shown with every game their skill, ability and determination to constantly improve.

“Our first priority as a club is to push all of our players to reach their full potential and from the first match of the season, we have told them that if they go out and be the best that they can be, they will get the results they deserve. That is what they have done, week in and week out, and we are immensely proud of each and every one of them. “

Next season will be a whole new challenge and another massive step up but for now we will enjoy this result and celebrating this brilliant group of players.”

The final match of the season for Ballymena United Ladies will be against Larne Olympic Ladies on Thursday 15 August at the Showgrounds, kick-off is at 7.30pm.