Silverware for Valencia, Rangers and Glentoran 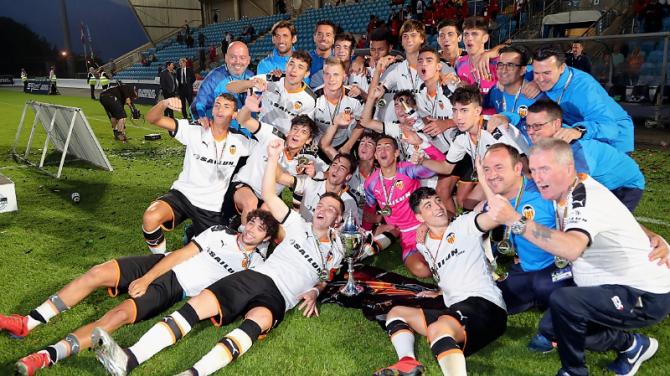 THERE was silverware success for Valencia, Rangers and Glentoran at finals day in the STATSport SuperCupNI tournament.

Spain side Valencia beat Newcastle United 2-1 to win the Premier crown and in the Junior Section Rangers beat Charlton Athletic 2-0 in their respective finals on Friday night at Ballymena Showgrounds.

Earlier in the day at the former home of the Cup tournament, Coleraine Showgrounds, Glentoran beat Dungannon United 2-0 in the Minor final.

SuperCupNI Chairman, Victor Leonard, was delighted with the way the 2019 tournament went - and is already working with his Committee to make the 2020 event even better.

“It was a very successful tournament, the reports we are getting back from spectators going to watch the games are about the quality, they were really, really good this year. Some people think it is of as high quality as they have seen,” he told Guardian Sport.

“We are delighted with the way everything went. Friday night’s finals, with four very well known teams, added to the attraction.”

The Chairman was pleased with the weather - and he spoke highly of new venue Ahoghill’s facilities, as well as those at Clough, Brougshane and Ballymena.

“Everyone did a fantastic job getting everything ready for the tournament,” said Mr. Leonard.

The Chairman said they are already thinking bigger and better for 2020.

Meanwhile, the old problem of lack of hotels did not go away. Each year the tournament organisers admit it is difficult fitting everyone in”!

“It is hard to get hotel space,” he outlined to Guardian Sport. “ We had teams staying in the Mid and East Antrim area, and Causeway Coast and Glens area. And we had teams in Derry/Londonderry area, along with teams in the Hilton in Belfast and Dunsilly outside the area.

“ It is difficult getting them all fitted in. We also used other facilities; the University of Ulster was full of teams this week.”

He made it clear that accommodation is something that will top their planning agenda next time round.

Mr. Leonard praised the top organisation from those couriering and looking after the teams throughout the week. “They have done a fantastic job,” he concluded.