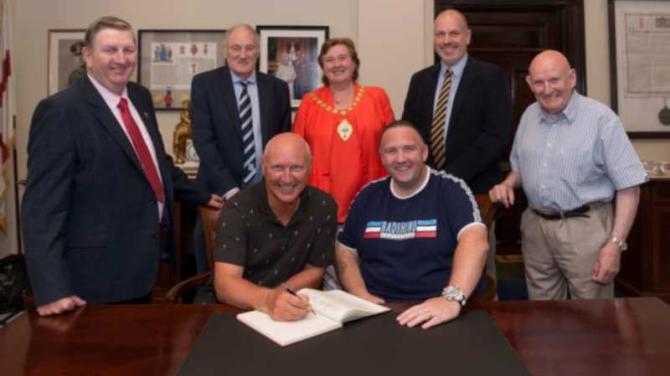 MID and East Antrim Borough Council has hosted a reception for Ballymena United, Larne FC and Carrick Rangers as the trio prepare to embark on action-packed seasons in the Northern Ireland Football League (NIFL) Premiership.

Twelve teams will compete as the new premiership campaign kicks off on Saturday 10 August 2019.

Excitement levels among local fans have reached fever pitch, with all three local sides set to play in the top tier of football here.

The Mayor of Mid and East Antrim, Councillor Maureen Morrow said: “It was a pleasure to host the chairs and managers of local clubs at the Braid ahead of what promises to be a really exciting season. Unfortunately, Larne FC had a match and could not attend but have kindly invited me to attend their first match of the season.

“I want to express how proud we are of all three teams who continue to go from strength to strength.

“Ballymena United had a superb season last year, and it is so exciting for Larne FC and Carrick Rangers, who head into the top flight following their promotion from the Championship.

“The players, staff and supporters of all three clubs are fantastic ambassadors for Mid and East Antrim and I will be cheering them on as they compete.”