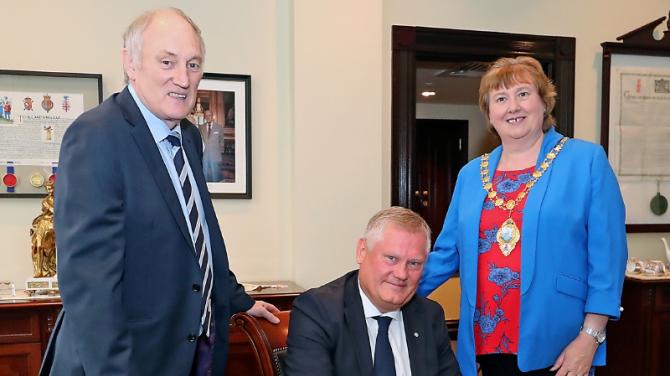 The United Chairman was speaking at last Thursday’s special reception for visiting Malmo officials in The Braid (Town Hall).

“We are fortunate that our Council (Mid and East Antrim) are very much behind us. It is very necessary for Councils to support and develop their clubs and facilities,” said Mr. Taggart.

The Chairman recalled the massive developments which have taken place at the Showgrounds over the years thanks to Council and Ballymena United working closely together, bringing in grant aid and providing superb facilities.

The United official said the Showgrounds are multi use - “The stadium is there for everyone in the Borough,” he declared.

The Chairman said the Showgrounds is to be used for major football tournaments - and if funding can be secured there will be numerous major changes taking place at the town venue.

He said if the money can be released from Stormont the potential is there - “But we (Council and United) must be ready,” outlined Mr. Taggart.

And he said the legacy could be left at Council with the public acknowledging just how they had provided such excellent facilities for future generations.

The Chairman outlined that over 250 young people attend the United Youth Academy, Ladies All Stars have a good following and up to 100 are involved at youth level.

He said such a set up brings everyone together to play football, making them all part of the United team.

“All this is for the benefit of the youth and the town,” said Mr. Taggart.

The Chairman thanked all at Malmo for the excellent hospitality they showed to the Ballymena United officials, players and supporters in the away Europa League round.

Meanwhile, Malmo Chairman, Anders Paulsson, said it was a great pleasure to be in Ballymena.

He said it is important to get their players to come outside Sweden, and to understand the culture of other countries.

“It is important to develop people, it is also great value on and off the pitch to be here. We hope we can win and take our next step,” he said.

Mr. Paulsson talked of the similarities between Malmo and Ballymena United, recalling that 10 years ago they met with their City officials asking for help to develop the side.

He said they are now seeking further help to get an indoor stadium built!

The Chairman concluded by wishing Ballymena United good luck with their future developments.

A superb meal, provided by Caulfield and Dorrity Catering, was enjoyed by all.

Mayor, Cllr. Maureen Morrow, welcomed the Malmo visitors, before presenting them with gifts. The Malmo officials gave gifts to the United personnel present. Mid and East Antrim Council’s Director of Operations, Philip Thompson, said Council works very closely with Ballymena United. “We have made a lot of progress.” he said. And he hoped the Malmo FC officials enjoyed the reception at The Braid (Town Hall).

* One of the Swedish visitors at the reception was former Malmo player Claes Malberg!

He played in the 1979 European Champions Cup final, which they lost 1–0 to English club Nottingham Forest.