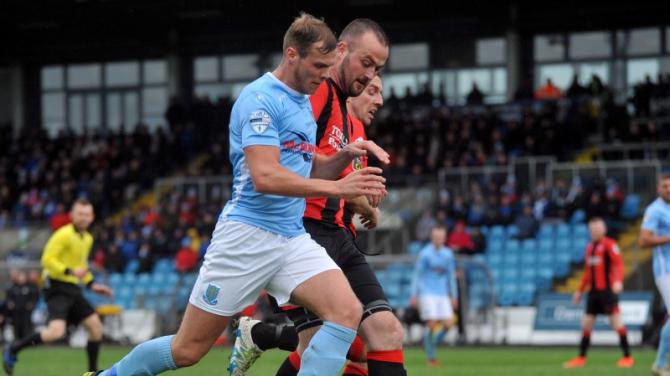 The 23-year-old from Cullybackey knows they will be facing the top side in Sweden.

But he points out he is going to enjoy every single minute of both ties.

“It is going to be a massive game, hopefully in front of a big crowd and played in an amazing atmosphere,” he told Guardian Sport.

United are making history by reaching this first round Europa League stage for the first time.

It was Millar who helped them get this far. His goal against NSI Runavik from the Faroe Islands played a part in United’s 2-0 home victory. A scoreless draw in last week’s return leg saw United earn this week’s clash with Malmo.

Millar, who works in JB Sports in the Fairhill Centre, says he is looking forward to playing in the biggest match of his career!

“It’s a massive achievement for us to have actually reached this stage, but we will prepare the way we do for every game and give it our best,” he told Guardian Sport.

“We have nothing to lose, and intend going out, giving it a good crack, and see what the outcome is,” he said.

“Malmo are a massive team with a lot of quality players, but it will be a good experience for us all and something we will remember for a long time.”

The Cullybackey man said manager David Jeffrey and assistant Bryan McLoughlin have made “a massive difference” since they came in.

“They know what and when to say, at just the right time. They have helped me develop so much as a player since they came to the Showgrounds,” said Millar.

The sports shop employee said it was a great feeling scoring against NSI Runavik - “But the main goal was getting the result and into the next round,” he said. (Continued on Page 46)